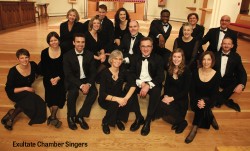 Going back to graduate school this year has made me terrified of making declarative statements about music, choirs or pretty much everything else. What I had previously assumed to be safe, boring statements of fact have turned, each and every one,  into points of heated argument.

For instance, previously I would have in all innocence said things like “next week I am going to hear Mozart’s Mass in C Major.” Now, no sooner are the words out of my mouth than I feel compelled to explain   (before someone points it out) that I am actually attending a concert, not a church mass like the one at which Mozart’s music would have first been heard; and that I realize that the C Major chords being sounded will not bear any resemblance to the timbre and tuning of those imagined by Mozart; and that I am aware that the sweeping assumptions about the nature of Time implied by my use of the words “next” and “week” are presumptuous and not provable.

I’m not kidding! Individual words are the subject not just of discussions and articles, but of entire books. Heavily contested terms to both ponder and avoid: “music,” “metre,” “sound,” “sonata,” “Haydn,” “Beyoncé,” etc.

Masses: I mention all this because of the nature of March and April choral concerts, many of which feature musical settings of the Mass, and other sacred texts, to coincide with the Christian holiday of Good Friday and the six-week season of Lent. The last time I was at a traditional church mass was almost 20 years ago at a friend’s wedding. But I have sung in and attended performances of many masses of all types and styles since that time, and that is probably not an uncommon experience, especially for people involved in choral music.

When we hear a concert version of a mass, what is our relationship to the music? Is it a religious experience, an aesthetic one or some kind of combination of the two? How – and why – did Mozart and Haydn become part of a pantheon of classical music demigods, rather than the down-to-earth musical civil servants of the European courts they actually were? (Short answer: it’s kind of Beethoven’s fault, but let’s not get into that now.)

Speaking of Mozart, Haydn and masses, on March 15 Hart House Singers perform Haydn’s Paukenmesse (Mass in Time of War), a crowd-pleaser since its premiere in 1796. And on March 20 and 28 the excellent Exultate Chamber Singers perform “O Be Joyful,” a concert that includes one of my favourite Mozart pieces, his Vesperae Solennes de Confessore K339 (Solemn Vespers), as well as settings of Psalm 100 by Palestrina, di Lasso, Schütz and Mendelssohn. On March 7 Orpheus Choir performs “The Soul’s Journey,” featuring English composer John Rutter’s appealing Requiem setting. The concert also includes a rare opportunity to hear James MacMillan’s Seven Last Words from the Cross. MacMillan is a Scottish composer who has been recorded and performed extensively in the U.K., and it’s great that the OC is making his work available to be heard live. On March 28 Orillia’s Cellar Singers perform “Light Perpetual,” a concert that features Canadian Eleanor Daley’s setting of the Requiem mass as well as Fauré’s celebrated version.

Passions: Passion settings, which describe the events of the Christ’s crucifixion and resurrection, also take place this time of year. These are usually settings of the Christian Gospel texts. As with Mass settings, Passions have moved to a concert experience from their original church role.

On March 10 and 11 Toronto Mendelssohn Choir performs Arvo Pärt’s Passio, a setting that at least one critic found too reflective for the savagery and drama of the Passion story. I disagree. Pärt’s version is haunting, and a large group like the TMC can convey the work’s scope and grandeur. Audiences from all over the world have responded enthusiastically to Pärt’s modern take on classical tonal structures. For those who would like to explore his work further, on March 7 and 8 Kitchener’s DaCapo Chamber Choir perform his setting of the Magnificat text in a concert titled “O Earth, Return.”

Bach’s St. John Passionis the textbook example of this genre, and Tafelmusik’s interpretation of this work, performed every few years under the direction of Ivars Taurins, has become something of an institution in the city. Performances this year take place between March 19 to 22. As well as the virtuoso choir and orchestra, the performances offer a chance to hear the acclaimed English tenor Charles Daniels in the role of the Evangelist.

On April  3 The Georgetown Bach Chorale will be performing the same work in their home town. This month there is also an opportunity to hear another noted Bach tenor, Rufus Müller, in Kitchener-Waterloo, in the Grand Philharmonic Chamber Singers’ performance of Bach’s St. Matthew Passion. This companion piece to the St. John is performed more rarely, in part because of its larger scope and instrumentation needs, but many consider it Bach’s greatest choral work.

Personal: I try not to use this column to mention any concert in which I’m taking part, but I have to make an exception for the Metropolitan Festival Choir’s “The Grace of Mourning: Music for Good Friday” on April 3. Along with the crowd-pleasing Fauré Requiem and German Romantic composer Josef Rheinberger’s Stabat Mater, the MFC is performing a rare work that merits the interest of choral aficionados, Hugo Distler’s haunting Totentanz (Dance of Death). Distler was a German composer of great courage and principle, who actually committed suicide rather than be drafted into the German army during WWII. His musical language borrows from the Lutheran motet tradition that extends from Bach back to composers like Schütz, Schein and Eccard. Borrowing rhythmic and modal elements from this 16th- and 17th-century repertoire, Distler’s music offsets the harsh austerity of the text with great empathy and compassion.

Quickly: Two younger choirs deserve your attention and support in upcoming concerts. On March 15 That Choir performs “That Choir: Unplugged,” with choral versions of music by Pentatonix, Mumford & Sons and Imogen Heap, among others. And on March 28 the Univox Choir performs “Kühl/Caliente,” a concert in support of Doctors without Borders.

The Vienna Boys Choir is a venerable choral institution well-established for crowd-pleasing concerts and enjoyable repertoire. They are performing in Midland on March 24, Guelph and Brampton March 25,  Burlington March 26, Kingston March 27 and St. Catharines March 28.

And finally, a special note: this month the Elora Festival Singers will be travelling to New York to perform at Carnegie Hall. They will be performing a sneak preview of their program on March 8 in Elora.