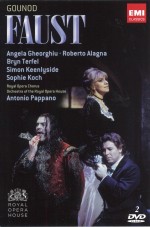 The story of Faust, an old man who trades his immortal soul for a second chance at youth, has fascinated artists for centuries. The opera composers were particularly impressed by it: there are at least a dozen works based on it, amongst them Louis Spohr's Faust (1816), Hector Berlioz's La Damnation de Faust (1846), Charles Gounod's Faust (1859), Arrigo Boito's Mefistofele (1868), Ferruccio Busoni's Doktor Faust (1916–25), Sergei Prokofiev's The Fiery Angel (1927; first performed 1954), Konrad Boehmer's Doktor Faustus (1983), Alfred Schnittke's Historia von D. Johann Fausten (1994) and Igor Stravinsky's The Rake's Progress (1951).

Gounod’s Faust is the most familiar work and this production features a stellar ensemble. As Faust, Alagna is in fine form, though his once–celebrated high end shows signs of strain. Gheorghiu shines as Margueritte, as does Keenlyside as her brother Valentin. Terfel infuses the role of Mephistopheles with the necessary malice. Finally, the orchestra under the skillful baton of Pappano does the score full justice. The production itself is another story. Messy and too literal (the drinking and carousing takes place under a giant neon Club l’Enfer, as if we did not get the connection), it does not help the principals either. Beautiful Gheorghiu here, for some inexplicable reason, labours under a mousy-blonde wig. The camera follows the singers too closely, revealing what we already knew – save for Keenlyside, they are not great actors. All in all, a wonderful DVD to enjoy with your ears (and heart) wide open and your eyes firmly closed.