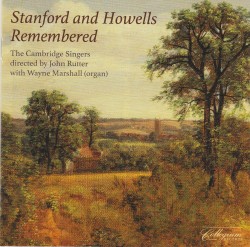 This 2-CD set of choral music honours composers Charles Villiers Stanford (1852-1924) and his student and colleague Herbert Howells (1892-1983), each with a full disc of highly accomplished music wonderfully sung. It is a version remastered in 2020 from tracks originally recorded in 1992, with three added tracks of which Stanford’s exquisite Latin Magnificat is especially welcome. John Rutter’s Cambridge Singers excel in this music, and are complemented by the fine acoustics of Ely Cathedral. The above-mentioned Magnificat for double choir really surprised me with its unusual harmonies and variety of textures, while the more straightforward English Magnificats in G and B-flat, also on the disc, offer interesting comparisons. In the G-major work, soprano Caroline Ashton shines with her clear vibrato-less tone. Of other Stanford works I was especially taken with O for a closer walk, an intimate and moving setting of William Cowper’s poem.

Turning to Howells, the Cambridge Singers handle his works’ Eastern scales, impressionistic harmonies and complex textures effortlessly. On this disc, the Howells Requiem (1938) seems both expressive and mystical; perhaps Rutter’s own association with the composer gave him insights into the extraordinary moods of each section. The compelling, late anthem, The fear of the Lord (1976), which Howells composed for Rutter’s choir at Cambridge, is here. So is another favourite anthem, Like as the hart (1941), which actually strikes me as bluesy! And there is much more to be discovered.