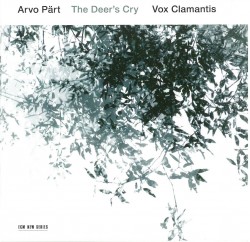 A mixture of the new and old recorded here by Estonian choir Vox Clamantis, this CD includes the world-recording premiere of Habitare fratres in unum and the largely plainchant And One of the Pharisees, which had its world premiere in California in 1992. There is a variety of Pärt’s music here: from the innocence-evoking Drei Hirtenkinder aus Fátima to the ode to a gittern, Sei gelobt, du Baum. (Google the latter via leones.de!).

Serendipitously, I started my day reading St. Patrick’s fourth-century prayer, The Deer’s Cry, and the title track contains a purity I would compare to David Lang’s I Lie. The Alleluia-Tropus is different than my recording by Vox Clamantis with Sinfonietta Riga: at a decade’s distance, this a cappella version is 25 seconds longer and less dance-like, perhaps the liturgical pace being more fitting for the intercession of St. Nicholas of Myra. Most notable to me, however, was Summa, a tintinnabulous piece containing the Apostle’s Creed in Latin. While it is recorded here a cappella, as originally written, I only have the string versions of it, which convey swells of movement (indeed, I made a little film with it accompanying a murmuration); the choral is more plodding and deliberate in its affirmation of belief – I could picture Joan of Arc reciting it defiantly, atop the pyre as she awaits the lighting of the wood. The CD ends with Gebet nach dem Kanon, a fitting closing prayer to the collection.The liner notes are Pärtesque: sparse, multilingual and presuming knowledge of his work and liturgical music history. But if you enjoy looking up information (e.g. the Russian scriptures have different versification at times: Drei Hirtenkinder is about the West’s Psalm 8:2), there’s a wealth of enlightenment available. Artistic director Jaan-Eik Tulve has applied the 81-year-old composer’s personal tutelage faithfully, and Pärt devotees will be enraptured, the faithful and secularists alike.