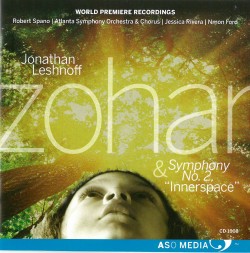 John Franklin aptly wrote in the autumn 2016 Imago newsletter, “…artists have a capacity to see what is coming in a culture and their work indicates the mood and values of society.” Jonathan Leshnoff’s Zohar and Symphony No.2 “Innerspace” represent part of his exploration of Jewish mysticism. But they also succeed in his attempt to transport us to transcendence, and isn’t that what we need when we feel mired in this current global atmosphere of oppression and alienation?

Symphony No.2 describes a benevolent “G-d,” whose omnipotence quickly becomes apparent in the second through fourth movements in the Atlanta Symphony Orchestra’s bold portrait of divinity. It’s huge and satisfies our need to encounter the incomprehensible. Then, the final movement, Unimaginable, shifts gears with one clarinet playing one note for seven seconds and suddenly we are confronted with 83 seconds of silence which complete the symphony. The silence is surprisingly moving and makes the listener mindful of the Jewish constraint against saying YHWH’s name.

Zohar is Leshnoff’s mystical commentary on the Pentateuch and was commissioned to be performed in conjunction with Brahms’ German Requiem. The text of the eponymous first movement sets the stage for the work: “Master of all Worlds…no thought can grasp You.” The second movement reflects on the puniness of man but for the grace of God’s recognition. In the following Twenty-two Letters, some theolinguistic synecdoche discusses the Hebrew alphabet that was used to create the universe. This Master is so great that the boy in the fourth movement (Shepherd Boy) feels inadequate to pray to Him correctly, and this is given a very sympathetic and informed interpretation by baritone Nmon Ford. The work wraps up with a choral reiteration that He is, indeed, “higher than all that is high.”

This CD struck me as being one that will become very important in the canon of religious choral and orchestral works.