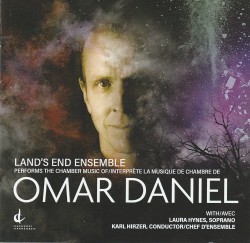 Piano Trios Nos.1 (1999) and 2 (2015) were written for the outstanding Land’s End Ensemble core, consisting of John Lowry, violin; Beth Root Sandvoss, cello; and Susanne Ruberg-Gordon, piano. Daniel describes Trio No.1 as an “exploration of opposites.” I found it challenging; after a soft mysterious cello opening, the piano bursts in with truly threatening dissonant outbursts. The contrasts continue in alternation between instruments towards the second movement’s end, and in the distance travelled between the finale’s near-silent opening and loud strings plus upward-rushing piano scales later. In Trio No.2 the composer notes a change in direction involving, among other things, the presence of nostalgia, made explicit in the consonances of the last movement.