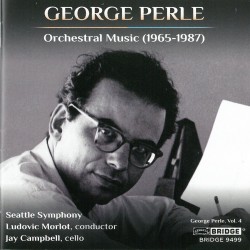 Christopher Hailey’s excellent accompanying notes to this release quote American composer George Perle (1915-2009) on his intentions: “Music that was going to do what music used to do, with its basis being the 12-tone scale instead of the diatonic [seven-note] scale.” Based on these premiere recordings, Perle succeeds with clear phrasing and textures, melodic and rhythmic interest, consistent pitch content and colourful, inviting instrumental groups. The Sinfonietta 1 (1987) exemplifies these traditional virtues, opening with a propulsive neo-classical feel. Perle’s string writing is exemplary both in part-writing and mood creation; in the second movement, the Seattle Symphony’s string section supports a questioning clarinet solo beautifully. Other works differ; A Short Symphony (1980) is more influenced by Alban Berg’s expressionism, especially in the intriguing last movement where Perle’s in-depth involvement and analytical insight into Berg’s works produce remarkable results.

Six Bagatelles (1965) are miniatures. No.5 is notable for its otherworldly high divisi strings that surge and recede. In No.4, a solo cello emerges powerfully, contrasting with sustained woodwinds. This piece led to the Concerto for Cello and Orchestra (1966), where the solo-orchestra juxtaposition becomes a natural fit with Perle’s style. He contrasts one orchestra section with another or with the cello in an idiomatic and imaginative way. American cellist Jay Campbell is expressive and assured, conductor Ludovic Morlot balances all wonderfully, and the Seattle Symphony shines. The clever Dance Fantasy (1986) rounds off this remarkable disc.