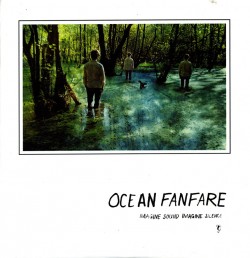 The following is an excerpt from Something in the Air (October 2015) which can be read in its entirety here.

Another application of this international formula is the Ocean Fanfare quartet. Consisting of Polish trumpeter Tomasz Dąbrowski, two Danes, alto and tenor saxophonist Sven Dam Meinild and bassist Richard Andersson, and American drummer Tyshawn Sorey, the fusion results in an exceptional modern mainstream unit on its cleanly recorded CD Imagine Sounds Imagine Silences (Barefoot Records BFREC O40 barefoot-records.com), which consist of six Dąbrowski and three Meinild originals. Despite having composed the bulk of the material, Dąbrowski isn’t any more prominent in performance than other members. Like a new drawing superimposed over an existing one, Ocean Fanfare has the instrumentation and left-field orientation of an Ornette Coleman quartet plus the stamina of the Jazz Messengers. Crucially, Sorey’s broken time sense and cymbal swishes are less prominent than Art Blakey’s, leaving supple booms from Andersson’s bass to define the rhythmic bottom. Featuring the drummer’s time-clock-like pacing, a track such as Lotus positions crying split tones from the saxophonist and melancholic plunger work from the trumpeter for an emotional narrative. 7 Days to Go extends the Coleman-like comparison, starting off echoing Lonely Woman until the skirmish takes on the strength of a battle with a double bass vamp and interlocked horn bluster. On the other hand the crackling velocity that propels US 12 resembles that of a classic bop 78, with each player’s contributions tossed every which way, until a pseudo-march sequence introduces some spectacular brass plunger tones and climaxes with conjoined twin-like horn unison. By the final Meditation (on a Visit from France), the band appropriately trades in blunt reed smears, kazoo-like brass hums and popping bass and drum beats for a stable but buoyant ending. Following trumpet and saxophone tone slacking, the theme slips away leaving behind a bass string pluck and cymbal resonation.