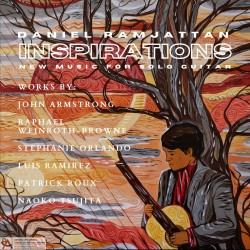 On Inspirations: New Music for Solo Guitar the Toronto-based classical guitarist Daniel Ramjattan presents a recital of works by composers based in Canada, played on a seven-string left-handed guitar (danielramjattan.bandcamp.com).

Patrick Roux’s lovely Valse Vertigo is from 1994, but the other five works were all written between 2012 and 2020. John Gordon Armstrong’s Five Inspirations from 2018 opens the disc, and is one of three premiere recordings here, the others being Stephanie Orlando’s Soon (2020) and Luis Ramirez’s Singularity (for guitar and audio) from 2019. The Gamelan Suite was written by Ramjattan’s wife Naoko Tsujita in 2019; the CD closes with the really attractive four-movement Catharsis, written by cellist/composer Raphael Weinroth-Browne in 2012.

There’s beautifully clean playing from Ramjattan, perfectly captured at The Church of St. Mary Magdalene, Toronto, by guitarist Drew Henderson, whose recording, mixing and mastering is, as always, simply as good as it gets.