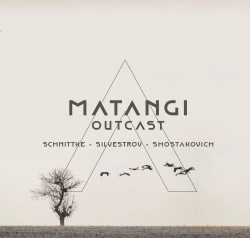 Just as Terry Robbins’ column is named “Strings Attached,” this month mine could be called “Strings Galore.” First up is Matangi: Outcast – Schnittke | Silvestrov | Shostakovich (Matangi Music MTM04 matangi.nl), an album devoted to “musical troublemakers and outsiders, three Soviet-Russian composers who wrote music that went dangerously against the tastes of the regime under which they lived.”

The Matangi string quartet has been at the forefront of contemporary music in the Netherlands since its founding at the turn of the current century. In their own annual (Un)heard Music Festival in The Hague they present works that are rarely if ever heard in Dutch concert venues, venturing beyond the realm of traditional concert music to include jazz, dance and pop while still embracing the classical canon. A recent guest at the festival was the reclusive Ukrainian composer Valentin Silvestrov (b.1937), a polystylist whose early works ranged from serialist to pointillist, resulting in him being branded avant-garde and refused entry to the Union of Soviet Composers. He has said of his early contrarian works “composing radical music was like working with a mountain of salt that you used up completely. Now I take a handful of salt, just for the taste.” Silvestrov’s delicate, indeed at times barely audible, 1974 extended one-movement String Quartet No.1 provides a gentle bridge between the more familiar works by Schnittke and Shostakovich on this disc, which opens with the former’s String Quartet No.3. Schnittke was also influenced by a plethora of styles, often rooted in Western culture, and likewise deemed unacceptable by the Soviet powers that be. He often incorporated what he called “forgeries” of other compositions and his quartet opens with quotes from Orlando di Lasso, Beethoven and Shostakovich which reappear throughout the quartet. Of particular note is the Agitato second movement that layers a ghostly hint of Lasso’s Stabat Mater into an angular waltz often interrupted by strident echoes of Shostakovich’s eighth string quartet. It is this latter work that concludes the disc. The Quartet in C Minor, Op.110 was sketched in three days in 1960 in Dresden where the composer was deeply affected by the ruins left by the Allies’ firebombing of the city during the late days of the Second World War. It is one of Shostakovich’s darkest works, opening with a Largo movement although, as mentioned, it also has strident moments in the Allegro molto second, and features a lilting waltz third movement, before returning to the glacial pace of the first in the final two Largo movements. The Matangi give outstanding performances of all three works on this particularly timely release.