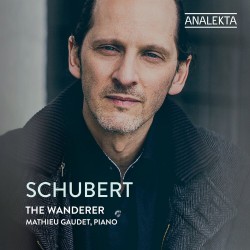 Has it really been more than three years since Quebec-born pianist and emergency room physician Mathieu Gaudet completed his ambitious series of 12 recitals presenting the complete piano sonatas of Franz Schubert which launched the equally ambitious project by Analekta to tailor them into a 12CD collection? Since then, Gaudet has proven without a doubt that he is among the foremost interpreters of Schubert’s piano repertoire, and this seventh addition to the collection is indeed further evidence. Titled The Wanderer, it features the sonatas D157 and D784, and, appropriately, the renowned Wanderer Fantasy D760.

Dating from 1815, the Sonata in E Major D157 was Schubert’s first essay in the form, while the Sonata D784 was completed five years later. As expected, Gaudet’s performance in both is a delight, demonstrating a particularly beautiful tone combined with an impeccable technique.

The famed Wanderer Fantasy from 1823 is reputed to be one of Schubert’s most difficult compositions, not only technically but also in nuance. While it comprises four movements, each one transitions into the next instead of ending with a definitive cadence, and each starts with a variation of the opening phrase of his lied Der Wanderer D489. The piece conveys a vast array of moods, but Gaudet draws them all together into a cohesive whole and the piece – like the disc itself – flows with incredible spontaneity.

Altogether this is an exemplary addition to this ongoing project and we can look forward to the remaining five in the series.