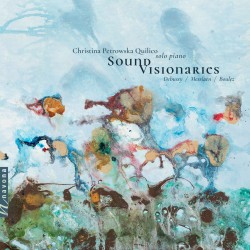 Vingt regards sur l'enfant-Jésus, I/27 (Excerpts): No. 8, Regard des anges