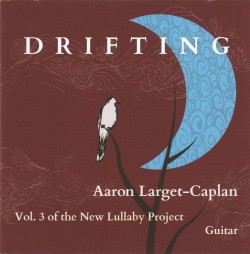 The following review is an excerpt from Strings Attached (September 2021) which can be read in its entirety here.

Drifting, Volume 3 of the New Lullaby Project is the latest CD from guitarist Aaron Larget-Caplan in his excellent series of specially commissioned guitar solos which began in 2007 (Six String Sound 888-03 stonerecords.co.uk).

The 15 short pieces here were written between 2010 and 2020 by 15 different composers, and while they’re not intended to help children get to sleep there’s nothing strident or challenging to the ears. “The compositional language leans tonal and the tuning remains mostly standard,” says Larget-Caplan, “but don’t worry, harmonics still abound.” Indeed they do, in another captivating addition to a significant series that continues to add miniature gems to the contemporary guitar repertoire.

You can find my review of Nights Transfigured – Volume 2 of the New Lullaby Project in the May/June 2021 edition of Strings Attached.