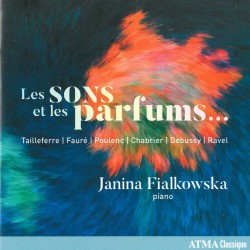 Janina Fialkowska’s latest offering is absolutely enchanting, a CD of “pure nostalgia” for the acclaimed Canadian pianist, as she states in her eloquent liner notes for Les sons et les parfums (the sounds and the fragrances).

Fialkowska transports us to the Paris of the 1950s and 1960s, when, as a youth, she visited the French capital; a time when Les Six members Francis Poulenc and Germaine Tailleferre were dominant forces on the French music scene. And, as Fialkowska tells us, a time when most of the older musicians with whom she came in contact during those visits, knew not only those noted composers, but also Ravel, Debussy and Fauré. One further fun fact: her piano teacher in Paris in the mid-60s, Yvonne Lefébure, actually worked on the two Ravel pieces featured on the CD with Ravel himself! Can anyone imagine a headier environment for one’s musical studies?

Fialkowska’s “love letter to Paris” includes works by all of the above-mentioned composers, as well as Emmanuel Chabrier. From Tailleferre’s charming and shimmery Impromptu, Fauré’s sensuously evocative Nocturne in E-flat Major Op.36, and Poulenc’s sparkling Intermezzo in A-flat Major FP118 with its sense of yearning, to Debussy’s beloved and beyond-beautiful Clair de Lune and the stunning, virtuosic and impressionistic pleasures of Ravel’s Jeux d’eau and Sonatine, Fialkowska indeed captures les sons et les parfums of a bygone Paris. It is there in the characteristic nuance, warmth, commanding musicianship, delight and dignity of her performance, which is nothing short of ravishing.