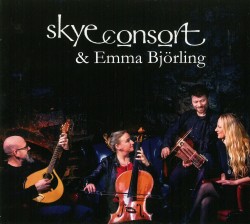 How exactly does a Celtic-Quebeco-Franco-Anglo-Acado-Gallo-Baroquo band team up with a Swedish folk singer? The answer to this intriguing question, posed by the liner notes, begins in November 2017, when vocalist Emma Björling was invited to Montreal to take part in a project which also featured members of the Skye Consort. The musicians casually discussed another possible collaboration; however, when Björling’s return flight to Sweden was cancelled due to inclement weather, the plans for this collaboration really began to solidify. On the final night of her stay, it was decided: there would be a new project. Glasses were raised, and voilà, Skye Consort & Emma Björling was on its way.

Flash forward to 2019, the group is embarking on tour and releasing their first CD. There is truly something for everyone on this fine recording, a collection of Swedish, Norwegian, Irish, Scottish, English, French-Canadian and original songs. Herr Hillebrand, a fitting upbeat opener, showcases the talents of the entire group. Next, Björling delivers a powerful, riveting rendition of Om Berg Och Dalar, a traditional Norwegian love song which segues into a Swedish polska. Björling’s stunning original, En Ängel, features empathic support from Amanda Keesmaat (cello) and Seán Dagher (bouzouki). The fiddle tunes, played by Alex Kehler, are an absolute pleasure.

The songs are beautifully arranged, and Björling’s vocals are fully integrated into the ensemble, giving the music the feel of a true collaboration. One of the best folk recordings of 2019.