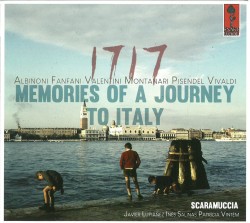 Imagine a journey to Florence, Rome and Venice. In 1717. Imagine, too, that you could take home with you your choice of manuscripts by composers based in those cities. This was the opportunity granted to Johann Georg Pisendel, in his own journey to Italy that same year. As if being allowed to take home manuscripts of contemporary Italian composers was not enough, Pisendel joined with some of them in composing. These joint efforts make up two tracks on this highly imaginative CD – there are even two CD world premieres.

Scaramuccia itself comprises just violinist, cellist and harpsichordist. From the start, a vigorous performance of the first Allegro from Tomaso Albinoni’s Sonata for violin and continuo proves this is no handicap. Scaramuccia’s detailed notes are more than helpful in finding out how Pisendel fared.

In the case of the Sonata for violin and continuo in D Major by Giuseppe Maria Fanfani, which here receives its world premiere, one wonders why this is so. Javier Lupiáñez’s enthusiastic violin playing in the Largo, Allegro and Tempo Giusto is first class. Giuseppe Valentini’s Sonata for violin and continuo in A Major starts imposingly before a really fervent Allegro, Minuet and Giga – at last, someone has discovered that a giga does not have to last less than two minutes! And then two pieces by Antonio Maria Montanari, the second in cooperation with Pisendel. Both opening Largos give us the chance to appreciate sensitive harpsichord playing and, once again, the passionate playing of Lupiáñez (Scaramuccia’s musicologist founder) in both Allegro movements.

This imaginatively created CD ends with its best-known composer working with Pisendel: the result a Sonata for violin and continuo which reminds us of everything that Vivaldi could create.