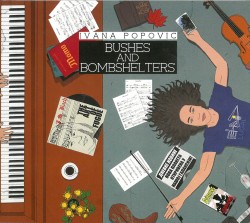 While it’s generally not my practice to mix reviews with politics, in this current political climate of hateful, anti-immigration rhetoric being hurled by xenophobic politicians (from both sides of our southern border and beyond), it delights me to review violinist and composer Ivana Popovic’s lovely debut album, Bushes and Bombshelters, which paints a poignant, musical portrait of a successful immigration story – her journey from Serbia to a creatively rich life in Canada.

An accomplished classical musician, Popovic’s compositional influences run the gamut from Bach and Shostakovich to Gypsy and Eastern European folk music. The ten original tracks on Bushes and Bombshelters cover the themes of longing and belonging, nostalgia, connection, homeland and new beginnings, and are crafted with the passion of someone who has experienced them all, intimately. Accompanying Popovic on her musical journey are pianists Saman Shahi and Perry Maher, double bassist Jesse Dietschi, trombonist Don Laws, percussionist Max Senitt, violist Nikray Kowsar, cellist Stuart Mutch and flutist Jamie Thompson. Popovic sings on three tracks; John MacLean lends vocals on one.

With the spirited clippity-clop of the voyage, the mood shifts from sombre to celebratory, brilliantly depicted by Popovic on electric 5-string violin with outstanding contributions from Laws and Senitt; this titular first track sets the tone for the entire album. From the evocative violin and piano duo, Sketches From Serbia, to the plaintive, prayer-like Blue for solo violin, and Memory’s exquisite interplay of flute, violin and cello, Popovic’s Bushes and Bombshelters is a journey worth taking.