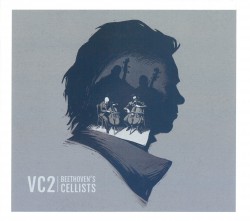 The following review is an excerpt from Editor's Corner (September 2018) which can be read in its entirety here.

The February 2018 issue of The WholeNote featured an intriguing cover showing two young men seemingly playing hockey with carbon fibre cellos, and an extended article about the cello duo VC2 comprised of Amahl Arulanandam and Bryan Holt (vc2celloduo.com). Sara Constant’s interview with the pair included discussion of their project Beethoven’s Cellists, which has now borne fruit in the form of a compact disc of the same name. The premise is that Beethoven’s colleagues were responsible for a number of design innovations for both cello and bow that have had a lasting influence on the instrument. Of particular note was Bernhard Romberg, and the disc opens with VC2’s very effective transcription for two cellos of Romberg’s Sonata No.1 in E Minor, Op.38. But the meat of the project is a number of newly commissioned works funded by Shauna Rolston Shaw, based in some way on Beethoven’s own writing for cello. The works featured on this disc are by Canadian composers Andrew Downing, Raphael Weinroth-Browne, Fjola Evans, Matt Brubeck and Hunter Coblentz, and draw respectively on Beethoven’s sonatas one through five. All of the composers are accomplished cellists and so the music is very idiomatic, but that’s about where the similarity ends. Each has a very different style and approach to the challenge and the offerings really do run the gamut. Very exciting and innovative additions to the cello repertoire performed with panache!