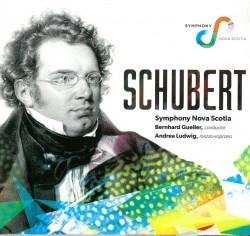 Franz Schubert’s Symphony No. 3 (1815) initially struck me as too slight to be the main work on this Symphony Nova Scotia disc. But an early Romantic sensibility already animated the 18-year-old composer, and I have changed my mind. The light themes of the opening movement undergo minor-key twists in the development, and the Allegretto also contains interesting key digressions. The last movement’s perpetual motion for me anticipates the tremendous energy of Schubert’s finale to the Symphony No. 9 in C Major (featured in William Forsythe’s wonderful ballet The Vertiginous Thrill of Exactitude). Here, Symphony Nova Scotia conductor Bernhard Gueller brings out comparable energies, including confident, incisive playing from the excellent Symphony Nova Scotia strings. And congratulations to the solo winds for sensitive phrasing in the lyrical middle movements.