Details
Written by Alex Baran
Category: Early, Classical and Beyond
Published: 30 May 2017 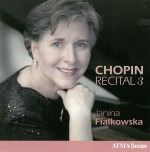 Janina Fialkowska continues her Chopin recording project with Chopin Recital 3 (ATMA Classique ACD2 2728). Fialkowska’s discs have proven consistently excellent. Her performances are marked by the welcome maturity that artists of her stature need as a hallmark of their career. Finding the “sweet spot” in a performance is what the creative quest is about. What seasoned performers know is that the “spot” is not where you last found it. It lies at the intersection of the performer’s awareness of self and their deepest awareness of the composer’s voice. This is the place we reliably find Fialkowska in her performances. What alters and enriches her playing is the desire to speak more clearly, more profoundly and more simply. Take, for example, the persistent pulse of the “raindrops” in Prelude in D-flat Major Op.28 No.15. Fialkowska treats this device as if it had true thematic significance. While only a simple rhythmic figure, she turns it into Chopin’s hypnotic, swinging watch while she moves through both turbulence and repose, all the while holding the experience together with a simple pulse.

It may, in fact, be Fialkowska’s command of the distance between the great heights to which Chopin so often rises and the nearly out of reach places to which he retreats that imbues her playing with such power. The disc’s opening track, Polonaise-Fantaisie in A-flat Major Op.61 is an eloquent example of this ability. It’s present in everything she plays and makes this a very collectible series.

The title of Tania Stavreva's first CD makes it clear what the recording is all about. Rhythmic Movement – Piano Works by Ginastera, Bates, Kapustin, P & A. Vladigerov, Stavreva is a high-energy performance of works driven predominantly by rhythmic impulse.

The Danzas Argentinas Op.2 by Ginastera are a challenging set with the middle of the three dances far more introspective than its rousing companions. But the off-beat and frequently odd-numbered rhythms are characteristic of much of the recording. Another Ginastera work, Ritmico y Distorsionado uses percussion to create a big and very effective finish to the disc. A few of the works on the CD are the performer’s own compositions. One in particular stands out for its exclusive use of the piano’s strings without any resort to the keyboard. The Dark Side of the Sun is a rich and atmospheric piece unlike anything else on the disc, using plucked strings and harp-like glissandos to colourful effect. Jazz Concert Etudes by Russian composer Nikolai Kapustin are intriguing for their American feel. It’s why Stavreva calls Kapustin the Russian Gershwin.

Stavreva makes her CD available only online – autographed if you request it (taniastavreva.com). 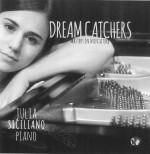 Julia Siciliano makes her recording debut with a 2-disc set Dream Catchers: Masters in Miniature (Blue Griffin Recordings BGR 381). This program is meant to demonstrate how a wide range of emotional content can be conveyed through the use of piano miniatures alone.

Siciliano chooses well-known miniatures, opening with Beethoven’s Bagatelles Op.126, and within the confines of these small works shows us the surprising power of his language where we least expect it. Schumann’s Carnaval Op.9, too, is a collection of brief thoughts, some less than a minute. But here the end points of the spectrum move even further apart. The delicate and understated character of Aveu contrasts dramatically with the virtuosity of Papillons and the grandness of the closing Marche des “Davidsbündler.”

Siciliano moves into Schubert’s Impromptus Op.142 with a very different mindset. Here she is intimately engaged with the composer’s personal and wistful sense of longing, nowhere more beautifully expressed than in the Impromptu No.2 in A-flat Major.

The stylistic change to Ravel and Debussy is a demanding one, but Siciliano comes to this with natural ease. The Debussy in particular is remarkable for her playing of the impressionistic swirls of motion in Poissons d’or.

Gerl may be new to the world of recordings but her talent is impressive, her repertoire substantial and diverse. Her presence at the keyboard is powerful and her technique is flawless. Her interpretive decisions are thoughtful and consistent. She plays Mendelssohn’s Venetian Gondola Songs with a light, airy wistfulness. Her brilliant performance of Debussy’s L’Isle joyeuse moves instantly into its ethereal world with ease. Her command of the nuances required in the Shostakovich Drei phantastische Tänze Op.5 is unsurpassed.

Gerl’s recording debut makes a memorable impact with an outstanding program designed around a challenging theme. Seeing her name on a major label soon will come as no surprise. 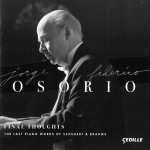 Mexican pianist Jorge Federico Osorio, now in his mid-60s, has an impressive discography of nearly three dozen recordings. Curiously, he has recorded nothing by Schubert, until now. This gap in his repertoire will have to remain a mystery. But we can be grateful he has begun to fill it.

In a new 2-disc set, Final Thoughts – The Last Piano Works of Schubert & Brahms (Cedille CDR 90000 171), Osorio performs the Schubert Sonatas in A Major D959 and B-flat Major D960. These works are substantial in both content and length, demanding a wide range of expression and technique. Osorio performs them undaunted by any of their challenges. His approach to the thematic material of their opening movements reveals the depth of his connection to Schubert’s intent. His playing is deeply moving and memorable.

While Brahms’ life was markedly unlike Schubert’s in every way, the kinship shared by their final works is perhaps only a posture, an attitude. This is what Osorio sets out to capture in these discs. The fire and passion of a work like Brahms’ Romanze in F Major Op.118 is a companion to any of Schubert’s most turbulent passages. Likewise, the most tender of the Brahms Intermezzos, especially from Op.118, capture the same posture of the heart that Schubert adopts in the opening ideas of both his sonatas.

Final Thoughts is an ambitious project for its focus on the last musical utterances of two revered composers. Osorio speaks with honesty and conviction about what he finds in them.

Mozart wrote these three concertos for harpsichord or fortepiano, with full orchestra. He also wrote them in such a way that the wind parts might be omitted, and the traditional four string quartet instruments used to create a chamber version of the work. Clearly, this called for very careful string writing and attention to balance. Colour, too, will have been a consideration for Mozart as he wrote for winds to enrich the orchestral texture.

This recording uses fortepiano with the quartet version but makes one important change. Conductor and, in this instance, first violinist Sigiswald Kuijken has replaced the cello with a double bass. His argument for this is that Mozart would likely have assumed that most private buyers of his published score owned harpsichords and would have chosen the chamber version, where the harpsichord was better balanced with the four string instruments. In choosing to record with the more robust fortepiano, the louder, richer bass was an equally robust alternative to the cello. Additionally, switching to double bass moves that pitch an octave lower, creating a fuller, more orchestral effect for the small ensemble.

The choice is a calculated but clever and effective one. It places a larger scale work in an intimate setting for a very satisfying and engaging performance. 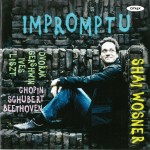 In his liner notes, Shai Wosner writes about the unique experience of improvisation. He describes the thrill of finding yourself suddenly in possession of something that’s actually working and sometimes watching the whole effort amount to very little. In Impromptu – Dvořák, Schubert, Ives, Liszt, Chopin, Gershwin, Beethoven (Onyx 4172), Wosner gathers 13 impromptus from some very dissimilar composers. He imbues each piece with immediacy and freedom, creating the original sense of how these impromptus might have been born as true improvisations.

While Wosner has every muscle necessary to rattle a concert grand, his real power lies in being small. He’s able to execute the softest hammer strike to the strings for a sound that is only describable as velvet. Once you’re drawn into this world of intimate playing, even a moderate crescendo can seem like a roll of thunder. Overall it’s this intimacy which makes for such a convincing argument that these impromptus could originally have been improvisations. Wosner makes them powerfully introspective and somewhat mystical. His playing is subtly hesitant and exploratory, creating the feeling that he’s never been here before, that this is in fact the moment of birth.

The Schubert Impromptus, in particular, are astonishing; the pair by Charles Ives, equally so for their daring modernity. But the truly free soul dancing on this keyboard is George Gershwin with his Impromptu in Two Keys. This is a slow Broadway Blues at its very best. 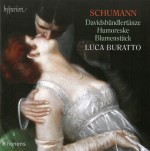 Luca Buratto is the 2015 Honens Prize Laureate. An assured performer, he plays with impeccable technique. His approach to the music of Schumann on this Honens-sponsored disc Schumann – Davidsbündlertänze, Humoreske, Blumenstück (Hyperion / Honens CDA 68186) reveals an uncommon gift for fresh thinking. Buratto has captured Schumann’s Romantic urgings and compellingly channeled them through the keyboard. He has cut loose the classical moorings that many pianists respect and instead allows his interpretations to drift freely into currents where forms become more fluid. It’s here that we feel the deep pull of Brahms, Chopin and Liszt.

Humoreske in B-flat Major Op.20 demonstrates Buratto’s ability to transcend the composer’s signature melancholy that is too often the extent of a performer’s achievement. Buratto moves beyond this by creating an ethos of mysticism rarely experienced in this music. The Davidsbündlertänze Op.6, too, reveal new possibilities for understanding how far Schumann wanted to propel the music of his time from its conservative shelter. Buratto exploits every opportunity to do this by stretching inner tempos and even pulling them apart a little, as if to experiment with left and right hand being out of sync.

None of this happens at the expense of the music because Buratto plays with such conviction that you immediately know he is certain he has revealed Robert Schumann’s true voice. It’s a deep connection that he sustains effortlessly through the entire recording. Hear him live if you can.