Details
Written by mj Buell
Category: We Are ALL Music's Children
Published: 27 February 2017

Julia Wedman lives in Toronto’s Bloordale Village, in the beautiful main floor apartment of a house owned by her dear friends Sue and Jubal and their adorable two-year-old son Oskar, who live upstairs. She enjoys spending time with her beloved family and friends, teaching, travelling, going to beaches, gardens and museums, learning about art and history, summer backyard parties that include dear friends eating at a long table filled with delicious food, and days that start out horribly but take unexpectedly wonderful turns. 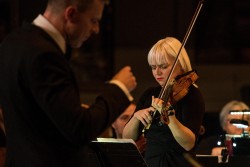 Violinist Julia Wedman first caught the attention of Southern Ontario audiences in a 1998 concert with the innovative I FURIOSI Baroque Ensemble. A core member of that ensemble from 1999 to this day, she joined the Tafelmusik Baroque Orchestra in 2005. Wedman is regularly featured as a soloist in Tafelmusik’s home concerts as well as their North American and  international tours, and she contributes her skills and creative thinking as an occasional leader and collaborator in the development of new programming. Wedman is also a member of the Eybler Quartet, a period-instrument ensemble that plays well-known but also often relatively unknown classical repertoire. Increasingly busy performing outside of Canada, Wedman is also a sought-after teacher and coach in Canada and abroad.

Born in Prince George, BC, Wedman and her family moved to Saskatoon when she was six. After high school, a former violin teacher helped Wedman move to London, Ontario, where she enrolled at Western University, followed by studies at Indiana University and the University of Toronto.

Suppose you're chatting with a friendly fellow traveller who asks what you do for a living? I always say I am one of those lucky people who makes a living doing exactly what I want to do – I get to spend my days playing incredible music with dear friends.

Tell us about your violins? I play two different violins....One is a 1694 Hendrik Jacobs (Amsterdam). Jacobs was one of the most famous Dutch violin makers, and the sound of the instrument is deep and beautiful. This instrument likes being at low pitch (A=415 or lower).

My second violin is from about 1860 and is from an unknown maker in Milan, Italy. Its sound is brighter and very sweet. This violin likes to be at a higher pitch (A=430 and up). So I generally use the Jacobs for Baroque music (Tafelmusik and I Furiosi) and the other one for later music (Eybler Quartet, etc.) 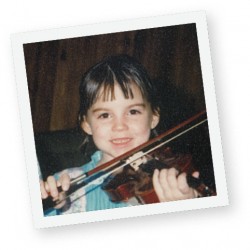 Do you remember that childhood photo being taken? No, but I definitely remember practising as a child and those pajamas were my favourite ones! My earliest memory of playing violin was that I had a little box and a stick. We had to wait for a violin to be ordered because I was too small for the ones available. I remember the excitement of my first real instrument. It was so beautiful, and it made a sound!

Your absolute earliest musical memory? Probably my dad playing some tunes on his violin – he would take out his violin and play from a book with old folk songs like Amazing Grace and Jeannie with the Light Brown Hair. I loved that book.

What did your parents do to earn a living? My father is a financial advisor (I know – that part didn't rub off). But the workaholic qualities may have! And he sings in the Victoria Choral Society choir. My mother is retired, but worked as the administration person for the Lutheran bishop of Saskatchewan for many years. She started piano lessons last year!

Why the violin? One day driving home in the car, my dad said to my older brother and me, "Ok kids, would you like to play violin or cello?" Already I had a wacky sense of humour, and I thought he said "jello" and started laughing hysterically. "How can you play jello? I can't play such a silly instrument! I'll take the violin!"

Music in your childhood home? Home was mom, dad, my older brother Chris, my younger brother Mark, my younger sister Naomi and our little cockapoo dog Rusty. We all had to take music lessons for ten years. Chris is an accountant now but still plays percussion in the Saskatoon Concert Band. Mark was more interested in sports and is a mechanical engineer, but now he puts his musical training to use practising with his two daughters who both take music lessons. Naomi is an English teacher in Barcelona and a wonderful violinist, composer and improviser. She plays more contemporary music - country, folk, rock, blues, etc.

My mom used to put on recordings of music at 6:15am, then bring hot chocolate up to our rooms at 6:30 to get all of the kids up to practise before school. My sister and I often produced recitals, complete with programs, for our dolls. We all played or sang at church and sometimes under great duress played for guests that came to the house. My siblings and I would often raid our parents’ record collection and dance around the living room. Favourites were Mini-Pops, Grease and Jascha Heifetz playing the Tchaikovsky violin concerto … 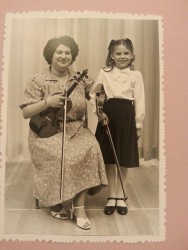 What can you remember about a first music teacher? One of my first music teachers used to cut my fingernails with these horrible rabbit scissors with beady red ruby eyes. They were so short they hurt and I would cry. She wasn't a warm person either and I complained a lot. My mom one day said, "Do you want to quit?" I looked at her in surprise “Of course not! Why would I want to quit?" Instead she found a wonderful teacher (Ellen) who suited me a lot more, and became one of the biggest influences in my life.

A first experience of making music with other people? I went to group classes when I started violin and often played with family members at home.  A particularly vivid memory of an early chamber music experience is of a friend and I playing a little piece called After you, My Dear Gaston. It was a little jazzy and I loved it. I don't remember my first time playing in an orchestra - it feels like I have always played in them! I do remember a spectacular blue spring coat that I received as a celebratory gift for playing in the music festival when I was about eight. 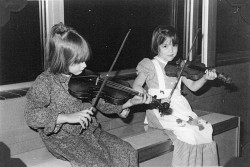 Where did you attend high school? And right after high school, what happened next? After high school (Holy Cross High School, in Saskatoon), I took a few months off until my former violin teacher decided I needed to get off my butt (she was right!) so she helped organize a move to London, Ontario. I lived with her family and babysat to help pay rent, and enrolled as at music student at the University of Western Ontario.  Ellen is like a second mom. She kicked my butt in university and opened her home and heart to me when my family was falling apart and my parents were separating. She is still one of the most treasured people in my life.

Do you remember the point at which you began to think of yourself as a career musician? I think I was about six, watching a Saskatoon Symphony concert, thinking "That's what I'm going to do!"

Did you ever think you would do something else? Sometimes I think about what else I would do... It would probably involve education or psychology, but I can't imagine not making music every day. It's the only thing I am happy to do even when I am sick or completely exhausted. I am not sure how I could survive without my daily sojourns to the magical world of music where real life fades away...

Where does music fit into your personal/family life at home today? I don't listen to a lot of music at home because I play so many hours every day - I like to have some quiet time at the end of a day. I find it difficult not to give any music my full concentration. I don't really like background music - it's very distracting!

I do a lot of singing with Oskar, my two-year-old friend who lives upstairs, and we also like to dance and play avant garde recorder duos.

If you were driving or showering (and all by yourself) and could sing along to ANY recording, what would you choose? I am terrible at remembering words, and I play so much music it's a bit of a "love the one you're with" kind of a situation....I sing the music that is in my head at the moment!  I always sing whatever I am trying to memorize! Right now a lot of Bach for Tafelmusik’s “Circle of Creation” program that goes on tour to the USA February 28. During I Furiosi weeks I am inevitably singing our encores...I would say the biggest ear worms have been songs by Coldplay, Adele, Prince and Kurt Cobain. I often sing walking to the subway...I don't drive!

Please mention engagements you’re excited about coming up in Toronto, in Southern Ontario and elsewhere in the next few months

~ March 18: Biber with Lucas Harris and Toronto Chamber Choir. I love Biber and this will be my first time getting to play some of his choral music – I can’t wait!

~ March 20: my beloved Bach Project at Gallery 345. I love this project! It’s a six-year cycle of producing the Bach Solo Sonatas and Partitas once a year with six different violinists, and each year we rotate and learn a new (super difficult) piece, so that at the end of six years we will have learned all of them. It is an incredible, character-building, humbling, inspiring journey!

The first week of May I will be doing something a little out of the ordinary… I get to travel to London, England to be guest concertmaster with Academy of Ancient Music in a program of Mozart and Haydn piano concertos with Richard Egarr.

Any new or recent recordings, DVD or film projects?

We just finished the final edits on a new Eybler Quartet Vanhal CD!  It will be available at our April 27 concert at the Heliconian Club. I can’t wait for people to hear it! This music is so happy and beautiful and deserves a voice! We are also working on the edits for our upcoming Beethoven Op,18 Quartets CD which will be coming out next year.

Edits are also underway for the release next year of Tafelmusik’s incredible Tale of Two Cities: Leipzig and Damascus CD/DVD. I just saw some video extras the other day and it is going to be beautiful!