Details
Written by mj Buell
Category: We Are ALL Music's Children
Published: 29 September 2014 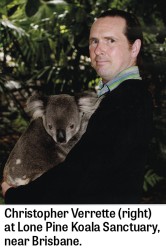 Violinist Christopher Verrette lives in the Lawrence/Bathurst area of Toronto with his daughter, Eleanor Verrette, a violist, and occasionally other itinerant musicians and strays. Some of his other current interests include reading, crossword puzzles, live jazz and taking long walks, especially when on tour in new places.

Born and raised in Exeter, New Hampshire, U.S.A. Christopher Verrette completed a Bachelor of Music degree and a Performer's Certificate at Indiana University in Bloomington. He was a founding member of the Chicago Baroque Ensemble and Ensemble Voltaire (Indianapolis), and has been a guest director with the Indianapolis Baroque Orchestra. A member of the violin section of Tafelmusik since 1993, Verrette is a frequent soloist and leader with the orchestra. He’s a busy collaborator with numerous ensembles around North America, including Toronto-based The Musicians in Ordinary. Verrette comfortably performs music from seven centuries on violins, viola, rebec, vielle and viola d'amore, and collaborated with Sylvia Tyson on the companion recording to her novel, Joyner's Dream.

Suppose you're chatting with a friendly fellow traveller, who asks what you do for a living? I always just tell people I am a violinist. They are often surprised, either because they have never met one, or that it is even possible to make a living that way. It may lead to a further discussion about how one defines “a living” (or simply “living”). Let’s just say I am grateful I don’t have to rely on doing anything else to get by. 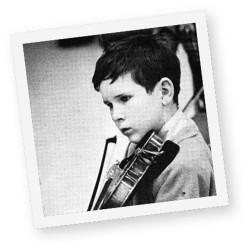 What about that childhood photo?  I don’t specificallyremember the photo being taken, but I certainly remember it being released as the cover for a brochure for the New Hampshire Youth Orchestra: I was too embarrassed at the time to feel honoured. It also brings back memories of those carpools to rehearsal every Saturday morning – it was an hour away; I haven’t seen any of those people in over 30 years! And donuts, we always looked forward to the donuts at break.

If you could speak with that young person …? I think I would ask if he was there because he wanted to be, and not because he was forced to (or just for the donuts?). He might be too shy to answer, but would probably say: “Yup”. Then I would tell him it’s actually okay to smile when you play the violin. (This is something I have gotten better at over the years, but some people tell me I still need to do it more.)

Early memories of music? Music always seemed to be there – radio, LPs, or sometimes live since my father was a musician. The radio tended to be on most of the day; mostly Top 40, I think. But my father liked to leave classical radio on all night, much to the chagrin of my mother. We had lots of LPs and I got to know classical repertoire through those. Also, my father brought me to lots of concerts at the university where he taught, and to family-friendly jazz events. He also played organ at our church.

Musicians in your family?  My father was a pianist. One brother plays cello and the other studied piano briefly. My mother played piano as a child but not as an adult. She did whistle along with the radio a lot, though. My local family in Toronto are all musicians, so we practise and rehearse at home and attend concerts. We do not tend to put music on at home as background music though; it is almost always specifically to listen to it.

First memories of making music yourself? Singing along with the radio or banging on kitchen utensils. I began on piano. I started violin when I was nine, after a demonstration at my school, but I had always wanted to play it. I wish I had known I could have started sooner.

What do you remember about your first music teacher?  I don’t remember my first piano teacher very well; I can recall being at the piano in her house just once. I remember her then-husband better, because he was quite a character. I remember my second teacher well because she was beautiful and I had a crush on her. My first violin teacher I remember extremely well because I was older and studied with her until I was 16.

Can you remember a first experience of making music with other people?   Probably singing Christmas carols with other kids – I have a very hazy memory of singing with a group on stage at my first school.

Do you know when you began to think of yourself as a career musician? Choosing to major in music at university was certainly a big step in that direction, and by that time I couldn’t imagine doing anything else. Going to the Spoleto Festival after first year and working alongside people with jobs clinched it. I could have taken a position in the Savannah Symphony at that time, but was probably wise to stay in school.

Do you remember a time when you thought you would do something else? As a young child, I think I took a passing interest in many of the professions young boys tend to be interested in: policeman, fireman, truck driver, etc. My family had a farm, so that was of interest for a while. I even remember once aspiring to be an old man – I’m almost there! Once I was playing violin, though, and especially in ensembles, I was pretty sure that’s what I wanted to be doing.

Tafelmusik – “Theatre of Magic | Music of the English Baroque” ( Nov 19 to 23) with Pavlo Beznosiuk, violinist and guest director –  works by Locke/Banister, Purcell, Handel, Tartini and Boyce