There is a buzz in the air at Toronto’s Kensington Gardens seniors home, as a pair of virtuoso violinists tune up their instruments in the chapel. The residents are gathering in neat rows next door in the Multipurpose Room lit by blinding white fluorescent beams. Some shuffle in, bony hands clutching hefty walkers. Others, slumped forward in their wheelchairs, are pushed by staff. Near the front, a nervous senior wrings her hands and chuckles. “Oh my goodness. It’s so exciting to have the kids – it’s such a warm atmosphere,” she says. In the back, a man with translucent skin and a rich baritone voice is getting into the mood, snapping his fingers and crooning a love song to anyone who’ll listen.

Rebekah Wolkstein and Drew Jurecka stride in, introduce themselves, and plunge deep into Dvořák’s Humoresque. Jurecka half-closes his eyes as he taps the beat with his feet. Wolkstein wrinkles her forehead as she meshes her part with his. The violin bows whizz in perfect synchrony, connected by an invisible skein of sound.

Sparked by the players’ youthful vitality, the residents are jolted to attention. Some sit a bit straighter, a new glow in their gaze. Others start to sway. The nervous woman’s eyes are riveted on the artists, and she starts bobbing her head to their beat. A young girl wraps her arms around the waist of a loved one, and the two rock back and forth in tandem.

Wolkstein and Jurecka have performed at illustrious concert halls across Ontario and beyond: Toronto’s St. Lawrence Centre for the Arts, Ottawa’s National Arts Centre, London’s Aeolian Hall. But this afternoon, away from the red carpet, the plush seats and glitzy curtains, the duo is equally at home in this downtown Toronto long-term care residence. “I like these intimate concerts the most,” says Wolkstein. “When you look out, you can tell you’re bringing so much joy to these people who are really isolated.”

This is, in fact, their mission. Jurecka and Wolkstein have been sent here by the Concerts in Care (CIC) program run by the Health Arts Society of Ontario (HASO), who bring the thrill of high-quality concerts to seniors sequestered in longterm care (www.concertsincareontario.com). HASO selects classical and jazz musicians from the province’s elite arts organizations, including the Canadian Opera Company, the Toronto Symphony and Tafelmusik Baroque Orchestra. Supported by corporations such as Azrieli Foundation, BMO Financial Group, government agencies, private sponsors, and modest fees from the homes, the group has presented almost 1200 concerts for 61,500 seniors in Ottawa, Pembroke, Sudbury and the GTA.

Concerts in Care started more than a decade ago. It’s the brainchild of Canadian retired insurance executive David Lemon, who founded the Health Arts Society of British Columbia in 2006. Watching a close elderly friend wither away in a nursing home left a deep impression on the philanthropist. “She had a huge amount of time on her hands, with nothing to do,” says Lemon. As dementia robbed her ability to communicate, loved ones stopped visiting, and she languished in loneliness.

By the end of her life she was cooped up in a room without mementos, separated only by plastic curtains from three confused roommates whose cries woke her up at night. Lemon was devastated by these insults to her dignity. “We as a society are not doing a good job giving full respect to these people,” he says.

After her death, it gradually dawned on the lifelong music lover that he could make a dent in their despair. Drawing on his network of musicians as well as his own success running an insurance business, he hit on the notion of bringing top-notch concerts to seniors facilities. While these places had long hosted amateur entertainers, Lemon felt that residents deserved more. “It’s so wrong to think that’s good enough for our frail elders,” he says. “They’re entitled to the same quality as we are.”

Since the first Concerts in Care recital comforted clients at a rehab hospital in Vancouver, six more sister societies, each one autonomous but bound by the same values, have emerged across Canada. The Health Arts Society of Ontario (HASO), was established in 2011. Together these groups have regaled the elderly across most of Canada.

The shows provide more than just first-class entertainment for shut-ins. They also help to ease the pain of estrangement which pervades many seniors homes.

“It can be very lonely even in a large institution,” says Health Arts Society of Ontario executive director Debra Chandler. While some gregarious seniors welcome the opportunity to befriend others in their building, many yearn for their old social life and have trouble adjusting to their new reality. Some will barricade themselves in their rooms, seeking comfort from a few familiar belongings. “Whatever facility they are in can feel like a prison,” says Chandler.

And there’s little to fill the vacuum left by these losses. “They might get a movie or a bingo game once a week if they’re lucky,” says Jeanne Lamon, artistic director of HASO. “There isn’t much to stimulate their minds.”

York University researcher Ami Rokach studies the problem of loneliness. The clinical psychologist says there are 1.4 million elderly Canadians who suffer significantly from the condition. “That’s a public health crisis.” The cumulative loss of loved ones with increasing age, as well as a decline in mobility can both lead to social isolation. Elders deposited in seniors facilities, rarely visited by relatives steeped in the “me first” Western culture, often feel abandoned.

The live concerts at least partially redress the sting of rejection. “People at the top of their game are coming to play just for them – that means they care,” says Rokach.

Musicians are chosen for their kindness as well as their capability, says Lamon. Once a potential performer has aced the audition, Lamon usually attends their first concert and evaluates their capacity to relate to residents. “I look at how the musicians talk to the audience – I can sense whether they’re in their own world, or reaching out to them,” she says. Performers are expected to supplement the pieces with stories. A Tafelmusik ensemble, for instance, might provide historical context by describing the instruments used during the Renaissance. Players sometimes share personal anecdotes. On one occasion, a young man introduced Liszt’s Spanish Rhapsody by describing the Spanish woman who had taught him the dance steps in the piece. “This makes people feel like they know him a little bit – and turns the concert into a social experience,” says Chandler.

Wolkstein has a special kinship with seniors. After her grandfather moved to a nursing home following a series of strokes, she visited him regularly. Since he had trouble talking, they couldn’t communicate through language, so the violinist reached out to him through their shared medium of music. When she played familiar songs, he would start conducting with his good hand, often moved to tears, says Wolkstein. “It was the best way we had to connect to him.”

Wolkstein draws on this well of compassion to make her listeners feel welcome. “There’s this warm space we create for people to come out of their rooms and enjoy something together,” she says. While she sticks to the program during her formal recitals, Wolkstein sometimes invites personalized requests during her gigs with Concerts in Care. “That means so much to people when you can play the exact piece they want to hear,” she says.

Jurecka also makes an effort to bring the most vulnerable residents into the fold. Once after a concert at a hospice, he was asked to play at the bedside of a dying patient. The man’s family requested one of his favourite pieces, Amazing Grace. By the time the final notes soared to the ceiling, everyone was in tears. “Music reaches deep and evokes strong emotions,” says Jurecka.

It seems to be firing up today’s listeners. At times too much. One resident provides a running commentary throughout the show, steadfastly ignoring the embarrassed caregiver trying to shush her. The man with the beautiful baritone seems to think it’s an open mike day and spontaneously belts out A Nightingale Sang in Berkeley Square in perfect harmony with the instrumentalists.

The performers don’t mind when audience members crash the show. “We’re trained to deal with distractions,” says Wolkstein. Besides, their enthusiasm shows that they’re having fun. The singer knew all the words to the song and seemed to be stoked by his solo, says Wolkstein. “It’s wonderful that we can bring this gift to people who enjoy the music that we love,” she says. 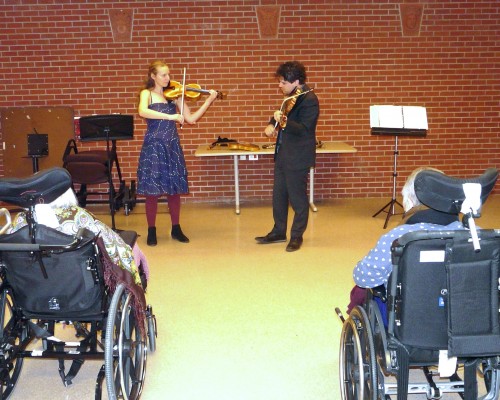 While musicians have always recognized the therapeutic potential of pieces, research is finally validating these beliefs. Listening to our favourite tunes releases pleasurable chemicals, including dopamine and opioids, which elevate the mood and reduce stress, says neuroscientist Daniel Levitin, professor emeritus at McGill University, who details these effects in his book, This is Your Brain on Music.  Songs also keep us company. “If you’re depressed or feeling disconnected, it can be uplifting to listen to sad music and realize that you’re not alone – the composers have felt the same way,” says Levitin.

Live concerts are especially invigorating. In one recent study, Levitin showed that the brainwaves of people listening to the same music simultaneously began to coordinate with each other. He speculates that we secrete small amounts of oxytocin, the “cuddle hormone,” in these situations, stimulating a sense of trust and bonding.

Music’s ability to rekindle memories can also boost our spirits, says Levitin. Familiar tunes can evoke strong sentiments which transport us back to good times associated with these experiences. These soothing recollections can dispel some of the loneliness, he says.

Care staff have also witnessed the transformations wrought by tunes. “People leave the concerts in better spirits, smiling and dancing back to their rooms,” says Abiola Awosanya, programs manager at longterm care home Cedarvale Terrace. The music can take residents back to happier times when they attended shows with loved ones. The shared enjoyment also yokes audience members together, says Awosanya. “They look at each other, nod in agreement, and sometimes even reach out to hold hands.” Afterwards, some residents continue socializing, trading reminiscences sparked by the songs.

Chandler has heard similar testimonials from caregivers. At one Ottawa long-term care residence, a nurse began to cry after a musician performed for a client with dementia. “He’s been catatonic for years,” she told Chandler. “I’ve never heard him humming, but he’s humming today.”

At Kensington Gardens, the musicians wrap up the concert with a rousing, toe-tapping tango. The audience erupts into applause, one man shouting “Bravo, bravo” over and over. The duo bow and bid the crowd a wonderful afternoon.

It seems they’ve already made the residents’ day. The nervous lady seems calmer now, her hands still. “I think it’s amazing how good this is for people,” she says. Back in his room on the fifth floor, the man with the beautiful baritone is revelling in the afterglow of the limelight. “I’m old but I still have a good strong voice,” he says. “I held the show together.”

The musicians leave feeling satisfied that, for a short while at least, they’ve catalyzed a closeness amongst their listeners. “There are so many people who are lonely in Toronto – that’s why I love to put on concerts and see people come together and bridge those unseen divides,” says Wolkstein.

Author: Vivien Fellegi
For a list of writings by this author, click the name above
More from this author: 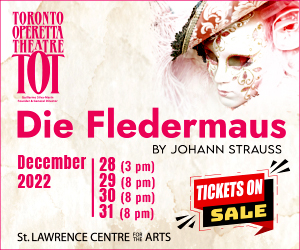