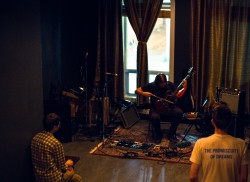 Hugh’s Room, the Matador and the Music Gallery, just three of Toronto’s smaller-scale spaces dedicated to music performance of various kinds, have all been in the news. For one reason or another, they’ve all been struggling to keep their doors open, to re-open after a hiatus, or – in the case of the Music Gallery – are scrambling to find alternative performance venues after being forced for the time being to unexpectedly vacate their current location.

Now Ratio, another treasured small venue, has announced its own “Decreation,” winding up its operations with four final concerts. Run by a cadre of artists, musicians and dancers, another player in Toronto’s constantly evolving intimate music venue landscape is turning off its lights for the last time.

Booked for June 2, 3, 4, and 10, Ratio’s final concerts feature returning local as well as visiting musicians – a blend it has maintained from the outset. While some of the concerts will have already happened when you read this, it is worth investigating Ratio as a case study of just one place for “alternative” music presentation in our city. Supported by audiences small in number though significant in passionate commitment to their music of choice, the importance of such venues as valuable cultural incubators is too often overlooked by the mainstream.

Ratio opened with a bang in the winter of 2014. Just months later, the venue surfaced on the city’s cultural map with an honourable mention in blogTO’s Top 10 intimate concert venues in Toronto. In its December 4, 2014 story, blogTO reported that “tucked in a second floor apartment above a variety store at 283 College in Kensington Market, the venue has kept busy, often hosting multiple events per week from live concerts to film screenings to art pop ups, all or nearly all with an experimental bent that the bar scene is often hostile to.”

During its three-year run, Ratio proved to be a big tent adventure. The multidisciplinary creative minds who lived there were mirrored in the diverse bookings that filled it. Despite being run on the thinnest of shoestrings, its genre-rich music programming nevertheless included ambient, free improvisation, drone, sound art, new music, abstract electronic music, wayward pop, rock and folk projects. It also presented a few select non-Western musicians.

Ratio’s story links with larger community concerns around the availability and viability of Toronto’s alternate music (and other performing art) venues, public places we enjoy experiencing live music in – and ones which seem to be under mounting threat. It’s also about the broader music scene: local and visiting musicians, their audiences, as well as the people behind the scenes who finance, program and run such small venues. Their devoted work is seldom parlayed into substantial income – yet as Ratio’s track record illustrates, it can yield significant dividends to the communities they serve.

In late May I spoke to Nick Storring, a cellist, composer, music journalist and one of Ratio’s resident programmers, to explore what made it tick. Storring recounted Ratio’s backstory. “A bunch of us – seven people actually – wanted to create an artists’ colony,” he said. “We eventually found that [for all its successes] it also had its challenges.”

“It’s also significant to note that it was a live-work space,” Storring added. “Part of the mystique of the space was that the audience actually entered a home. The seating was approximately 50 to more than 60 people on any given night, an intimate, inviting space.”

“We wanted two large categories of listeners intersecting at Ratio – both [those comfortable with concert music conventions] and those with less exposure to those conventions, and frankly were weirded out by it. The presence of both brought a lot of [positive symbiotic] complexity into the fold,” he said.

I asked about Ratios’ mission over its three years. “We wanted a space where high quality listening was central, but which was also relaxed…a community gathering place,” said Storring. “I feel we made a contribution to the tangible community of local and international exploratory music scenes. It was inclusive in the sense of age, genre, scene, and gender – it wasn’t just a ‘boys’ club’.

“As a practitioner of exploratory music I know people performing that music are thirsty for places to play. Some of our programming was generated via social media [and also publicised there]. For example, the Toronto première of American composer and innovative improvising pedal steel guitarist Susan Alcorn came about as a conversation on Ratio’s Facebook page.”

Does it not sound similar to the role of the Music Gallery, when it first set up shop in 1976 on 30 St. Patrick St. as the home of the CCMC, two generations ago? “There’s definitely a similarity in intent I think, except that we actually lived in the [Ratio] space,” replied Storring.

“In addition to music, we also had a few gallery shows and interdisciplinary performances,” he added. “The Mystic Arts Collective events coordinated by J.D. Pipher are an example. Dancers also used the space. Kathak dancer Deepti Gupta rehearsed at Ratio, and Dance: Made in Canada launched one of its seasons here.” However, Ratio remained primarily a music venue, indicative of the vibrancy of Toronto’s underground music scenes.

By all outward appearances the place was humming – so why the Decreation? “The space turned out to be prohibitive to run,” said Storring. “The rents in the neighbourhood are constantly rising. It’s just not sustainable to run an arts living/presenting space today [in the city core]. In retrospect, it was very much a labour of love.”

What can audiences expect to hear in Ratio’s final Decreation concert, on June 10?

“We wanted to cover a broad scope of music [in our final series], and present music that was important to us. Much of it we have featured before,” said Storring. More information on the June 10 concert, which features Chik White, Slow Attack Ensemble, A Pure Apparatus, and Fleshtone Aura, can be found on the Facebook event page.

Ratio’s presentation track record shows an unwavering support for a far-reaching range of live music, patronised by exploration-hungry audiences. As of this month, it is passing on that torch.