Saying nothing about Maureen Forrester’s passing felt unimaginable, but I worried that by the time July’s issue of The WholeNote hit the stands there'd be very little not already said.  And indeed, there have been some fine things written  already.  For example: 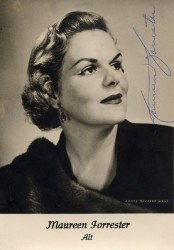 …Her embodiment of earth-mother, reigning queen and good sport made her the shining model of what Canadians want a diva to be. And her some 30 honorary degrees from Canadian universities (she was even chancellor Wilfrid Laurier University from 1986 to 1990) and her many other honours attested to her unique and powerful numen for Canadians. Her service from 1983 to 1988 as chair of the Canada Council left no doubt that her wisdom in the arts was valued. Her personal advocacy of Canadian music went well beyond lip service: she premiered and championed major vocal pieces by a wide range of Canadian composers. An authentic celebrity, she touched the Canadian nerve as no other singer of her time had done…

This is from Ken Winters' moving Globe & Mail article on June 16th :

It inspired the idea that The WholeNote's own community would have a wealth of memories to share. And indeed that seems to be the case. Famous and not so famous WholeNote readers continue to share how they remember Maureen Forrester and we've made a start at publishing their recollections, as follows.  We'll be adding new memories as they arrive, so feel free to revisit this page! And we invite you to share your own special recollections for publication online. E-mail musicschildren@thewholenote.com


Opportunity knocks
Although  I heard her many, many times in concert over the years, my memory of what she sang is gone. I do remember, however,  when I was maybe only 13 or 14, she sang on “Opportunity Knocks”, hosted by  John Adaskin I think. It was a talent contest, and she won first prize. I was of course supposed to be in bed asleep,  but I had a little radio beside my bed and always listened to it sneakily…. WholeNote reader Nedra Buell.

(Maureen Forrester was only 20 when she was heard for the first time by many Canadians on national radio. You can hear an excerpt of  the this CBC radio contest  "Opportunity Knocks" from 1951 by using this link: http://archives.cbc.ca/programs/1289/)


Be on time, be prepared and be nice
I first heard Maureen as a student at the University of Puerto Rico, as part of the Casals Festival in the mid 1960s and way before I myself thought of singing or even contemplated living, studying or working in Canada. Making her personal acquaintance came years later through Stuart Hamilton, another eminence of the Canadian musical scene. Until today and forever more I will continue to quote Maureen's simple but profound appraisal of her success in music - "be on time, be prepared and be nice" an ethical platform on which every artists must stand. … Guillermo Silva Marin: founder and General Manager Toronto Operetta Theatre, General director of Opera In Concert,  and also of Summer Opera Lyric Theatre.

Met through Glenn Gould
I first met Maureen in 1952. She came to Toronto from her native Montreal to sing in a concert series that Glenn Gould was presenting at the Royal Conservatory of Music. Glenn was, at that time, using my studio to rehearse in and in breezed this beautiful big blond girl with an infectious laugh and a thrilling voice. Maureen was one of the greatest artists with whom I had the privilege to work. Her unfailing generosity and astonishing musicality made her a thrilling colleague and a magnificent friend. My association with her was one of the great experiences of my musical life. … Stuart Hamilton: pianist, vocal coach, broadcaster, producer, and founding Artistic Director of Opera In Concert

Winter concert, “Circle song”
When I assumed the leadership of the Canadian Children's Opera Chorus in 2000, I wanted to make sure the children were aware of our outstanding Canadian singers.  The CCOC was invited to open the OPERA CANADA "Rubies" Gala and Maureen was one of the recipients that inaugural year.  She was so adorable with the children, so I invited her to be our honored guest at my first official Winter Concert.  She was escorted on stage by two young boys and presented with a bouquet of flowers.  I spoke about her and then she did something very unexpected, yet very precious.  She sang her little "Circle Song" for the kids right there on the stage and they fell madly in love with her.  She could sing from the telephone book and still be engaging!  Her charm was totally sincere and the children knew that.  We were fortunate to have her as an Honorary Patron for all those years. … Ann Cooper Gay, Executive Artistic Director, Canadian Children's Opera Company

Long before I met her
I enjoyed Maureen's performances long before I met her.  The first time live was either in Mahler's Symphony No. 2 (surely the definitive interpretation of 'Urlicht') or with the Bach Aria Group with Lois Marshall and, yes, it was their glorious performance of the duet from Bach's Cantata No. 78.  She supported the early efforts of Opera in Concert and sang Charlotte in Werther in 1975, a performance that featured a then unknown Paul Frey.  I remember being backstage with her once before our appearance in one of Niki Goldschmidt's extravaganzas and she was going over and over the words to 'Che faro', the renowned aria from Gluck's Orfeo.  I joked with her that surely she didn't need to review the words for that tune, but she assured me that it never hurt to refresh the memory, no matter how many times you had sung the work. Over the years, I came into her orbit as a singer, publicist and artist manager.  She was a gracious, warmhearted, outgoing person, whether on stage or in person and her infectious delight in people and music will long be remembered by her many friends and admirers. … Henry Ingram, Director - Concerts Division, Dean Artists Management

Wicked
Maureen Forrester used to come to the ‘Rubies’  every year and the whole audience would stand and applaud her as she entered the room.  She was much loved by everyone. Meeting her was rather like being introduced to the Queen – awe and love at the same moment.  I particularly loved her delightful sense of humour.  She could be quite wicked! … WholeNote reader Sue White was, at the time, General Manger of Opera Canada.

From my vantage point in the cello section …
In their 1975-76 season, the St. Catharines (now Niagara) Symphony celebrated the Centennial of the City of St. Catharines with a gala performance of Mahler’s Second Symphony (the “Resurrection”). They did this in style, using Brock University’s largest gym to accommodate a huge audience as well as massed forces for both orchestra and choir. Engaged as the alto soloist was none other than Maureen Forrester, and to take full advantage of her presence, Ms Forrester also sang a group of solos as a concert opener. I know all this because it’s recorded in the Orchestra’s archives. But I remember virtually none of it – except for one image: From my vantage point in the cello section I had a good view of the seated backs of both soprano and alto soloist and I saw that, when the time for the soprano solo approached, Ms Forrester graciously patted her colleague on the bum to indicate that she should stand up. Thus her down-to-earth, kind and fun-loving side is what makes up my private vignette of Maureen Forrester … Simone Desilets, WholeNote columnist

One personal choral memory
I knew Maureen Forester largely through her recordings but I have one personal memory. Many years ago I sang in a huge choir with people from all over Ontario. The conductor was the late Robert Shaw.It was an all-Brahms programme and Maureen Forester was the soloist in the Alto Rhapsody. At the dress rehearsal she sang her part not to the absent audience in the empty hall. She turned round and sang it for the choir. I thought that showed real class. … Hans B de Groot, WholeNote reader