Two leisurely phone calls – well an old-fashioned phone call and a zoom chat, to be precise – bracket this story. The phone call, bright and early on the morning of Saturday  Sep 19, was with violinist/composer Edwin Huizinga, calling from Owen Sound, where the 16th annual Sweetwater Festival (Huizinga’s first as artistic director) was well under way. The zoom chat, just three days later, was also bright and early – with Huizinga again, this time alongside singer Measha Brueggergosman, at a table inside Brueggergosman’s Halifax home, a kitchen behind them, and post-tropical storm Teddy, his career as hurricane having been cancelled ahead of his Maritime tour, whipping aimlessly at the trees outside.

I’d been wanting to talk to Huizinga and Brueggergosman for a while about their current collaboration, but had been expecting to have to speak with each of them separately, so it was an unexpected bonus to find out, part way through the Saturday call with Huizinga, that he would be flying to Nova Scotia on the Monday “to finish a project with our amazing fearless Canadian soprano Measha Brueggergosman.”

“Finish the project” sounds optimistic to me. For one thing, Huizinga and Opera Atelier (OA) have been exploring the 24-line poem at the heart of the project (“Annunciation to Mary” by Bohemian/Austrian poet Rainer Maria Rilke) for well over two years.

For another thing, the piece as described for the upcoming October 28 Koerner “livestreamed and fully staged” production, Something Rich and Strange is less far along than the vision for it expressed in OA’s pre-pandemic 20/21 season announcement, where Something Rich and Strange was to be the spring 2021 show, with Huizinga’s composition as one part of a double bill with Purcell’s Dido and Aeneas: “a commission by Opera Atelier that gathers together the baroque and the contemporary,” as Jenna Simeonov described the season as originally planned in her opera blog, Schmopera, back in January.

As things stand now, OA’s being able to pivot Something Rich and Strange into this October slot has been crucial to salvaging two seasons. This past April’s Handel’s Resurrection, an early COVID-19 casualty, has been moved into the April 2021 slot to maintain the vital Easter connection. What has been lost is the resonance of Resurrection’s original pairing this past April with OA’s Don Giovanni last fall, in a 2019/20 season teasingly titled “Saints and Sinners.” Similarly, Something Rich and Strange in its original April 2021 slot was slated to follow Magic Flute, also core Opera Atelier repertoire.

It was to be two seasons balancing old and new: something time-tested paired with something new; something definitely the opera paired with something we wouldn’t have understood as a operatic without one of the kinds of storytelling OA does best – finding moment by moment storylines in  lyrical musical things, and unlocking them vocally, physically, dramatically and visually.

Saints and sinners has an inbuilt operatic arc to it. Saints and more saints? Maybe not so much. But these are not ordinary times.

Opera Atelier’s decision, as far back as last fall, to move this spring’s scheduled Resurrection, into streaming-friendly Koerner Hall, with its re-expandable live-audience potential, looks prophetic now. In reality they mostly have Hamilton to thank for taking over OA’s Ed Mirvish Theatre home base for an unspecified amount of time. Just how unspecified none of us knew.

“With all the changes to the timing and the piece itself, we [Measha and I] decided the best way to finish up is to get on a plane” Huizinga explains. “I have been working on it for months and months – so many calls and zooms, I’m exhausted. “Get on a plane, make my way there. Because I can and because I must. I’m the kind of artist who likes to dive head first right in, and I am still relatively new at writing for voice. And of course I am not done here yet!”

He’s not complaining about the change to the deadline or scope of the piece. They are matters of fact. “I know the world is completely flipped upside down and thrown in the washing machine and someone added the wrong kind of soap,” he says. “But this is the time we have to tear open the door and play wherever we can whether it’s on our driveway or in a beautiful concert hall or at six degrees  celsius in an Owen Sound garden as the sun sets, because music is something people need to lean towards when things are harsh.”

The words tumble: “Like here, in Owen Sound. We have a really loyal audience coming out and helping us and it was so obvious last night  – there was this moment following the beautiful long applause after the final piece, where everyone stood up out of their lawn chairs and realized how special it is to just hear music travelling through the air towards their ears. We need this, David. There are many of us who have literally spent our lives finding music. So we have to just go find it.”

For Sweetwater this season, that vision has taken has taken the form of a string quartet (Huizinga himself along with close colleagues Marc Destrubé, violin, Keith Hamm, viola and Judy Hereish, cello) “bubbling” for a week together in an old house in downtown Owen Sound –sounds of music from four centuries being tried out, drifting through wide open windows to the ears of neighbours and passers by; then four days of criss-crossing Owen Sound and Meaford for pop up concerts at pavilions, historic homes and museums, gazebos and gardens, a bandstand,  and the Owen Sound Farmer’s Market. And in the the evenings between, the garden concerts with their glorious sunsets where, at the end of it all, a live audience – no streaming – stands up from their chairs to listen to quiet air, washed clean by music. 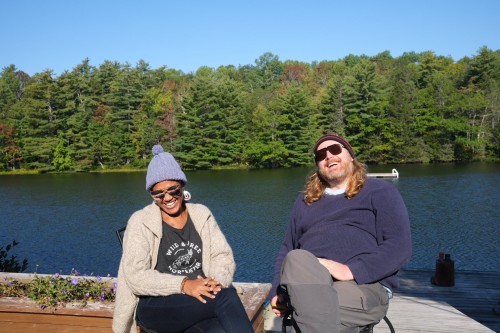 This is the second time Huizinga and Brueggergosman have worked face to face on the project. The first time, in late February, after signing on to the project, she visited him in California to the project. She visited him in California, where he’s spent the last year, at the end of February, right after taking the project on. “My cabin in the woods – that I’m renting – has luckily survived the fires. You could say I was evacuated,” he says, “but I had already put into place a master plan to get to Canada and quarantine and follow these two streams.”

For their first face to face collaboration, they went to Big Sur. “Kind of amusing now,” Huizinga says. “Going somewhere ‘remote’ in order to work. Back then it was called a retreat, now it has a different name.” After COVID hit, he says, the project took a back seat for a couple of months, and then Opera Atelier came back to us with a lot of changes, and ideas and thoughts, and of course the new deadline.

Again there’s that matter-of-factness to it all. “I kind of see the Opera Ateliers as the stars of this pandemic” Brueggergosman says. They at least rallied to provide sustenance to their artists. Always saying they know it’s not enough, but if we circle our wagons together in the same direction, we might just come through this on the right side of history, on the right side of what it means to be essential as an artist, understanding that the world in crisis needs beauty. Dedication to that, to excellence, can be its own pandemic.

She’s always been a fighter, Brueggergosman says, “but in order to be a fighter you need to have an enemy and for me artists have found that the classical music industry has never been, well, forward thinking. Right? We’re just not wired that way. It’s not what we do. We are holders and keepers of the grail. We are responsible for this repertoire we keep alive through our interpretation and our artistry.”

As she sees it, the industry has always been inadequate in its multi-pronged approach. “It has abandoned service, which is its real point, for spectacle” she says. “And that’s why we, as artists are fighting for our legitimacy, because we turned ourselves into circus animals and not community rallyers, which is what we are supposed to be for. And that’s where Opera Atelier is making a case for itself as an essential service  – in the service of beauty, and of excellence.”

“It’s really special” Huizinga adds “when you find yourself working with people who can’t … what to say …basically who can’t stop. It’s as simple as that. And it’s amazing. And that’s how I feel about working with Measha too. Because we just want to create now.” “Yes,” she replies, “because people are really hurting, so we have even more imperative as artists who have the capacity to translate that pain into beauty. We have the words and music.… Our challenge will be in having them trust they are not going to get sick, that the invisibility cloak of fear that coats this season is a justifiable response to the information they are getting. can lift. If people can come out of their houses to protest racism and injustice they can come out of their house to commune with beauty without shame.”

The bottom line for her? “The imperative is on artists,” she says. “We need to stop bitching. We are not legitimized by someone else, we’re essential by how we place ourselves. We place ourselves in the mix. We position ourselves in ways where we are not cancellable, where is prenters tell us we are cancelled what they are really saying is that they are cancelling themselves.”

And on the conversation goes, in the middle of a wannabe hurricane at the heart of a pandemic storm. Best thing of all, most of it is focused on the 24 lines in the Rilke poem that sparked the chat: the nuances of gender in German; why Grace Andreacchi’s translation works; where knowledge and consent come into it when the story tells of a sky god, in the form of an angel or swan sows his seed (and where does fault lie, as a consequence when cities and civilisations rise and fall.)

But at the end we cycle back: “Up to this point we have been distracted by systems that are never going to be loyal to us” Brueggergosman says. “They have to be removed in order for us to fully actualize our power, to dig deep into questions that should have been asked before. For me it’s a shifting of my loyalties, to the vision God has given me, the execution of it, the ability to make things happen, the autonomy of it -- like the autonomy of sitting around talking about a poem for an hour because of the power in it. My favourite part of all this is that I get to decide what things mean for me, at a particular time. I think every year we get the opportunity to see things from a new perspective, and this is one of those times.”

“See, that’s why I needed to be here,” Huizinga replies.