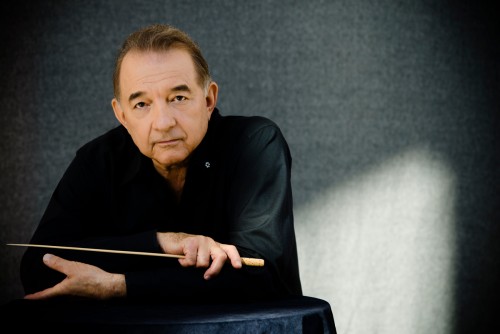 There’s a great Alex Pauk story that filmmaker Don McKellar once told me, about the final stages in the production of  McKellar’s 1998 feature film Last Night, for which Pauk and composer Alexina Louie, partners in life and in art, composed the score. (I can’t swear to when McKellar told me the story, except that, evidently, it must have been sometime after 1998.) Whenever it was, it’s had time to ripen with age and retelling, so I will trust all parties concerned to forgive the parts I am no longer getting quite right. 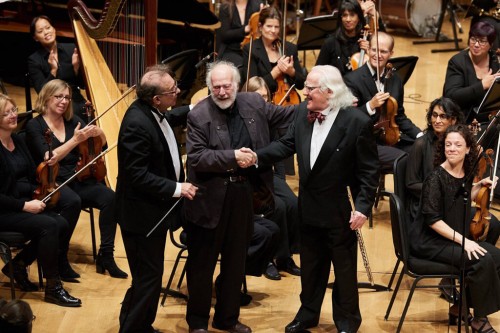 The way I remember it, Pauk and Louie contacted McKellar to say that the score was complete and ready for him to hear, and that an appointment “three sharp” was set for the given date and the appointed place. “Three sharp” was however not necessarily a musical term McKellar was familiar with, back in the day, so when he strolled up, Pauk was already pacing. “You’re late!” was the greeting, in a tone more stressed than McKellar thought the situation warranted.

McKellar wandered in, expecting to find himself with headphones on, listening to a tape or piano reduction or something … “and than they open the door to the room, and there’s a whole symphony orchestra there, waiting to do their thing. It felt for a moment as if I must have died and gone to Hollywood.”

As implausible as that moment in time must have felt, on a larger scale the fact that Esprit, the orchestra in question, is still alive and ticking after 35 years, is almost as implausible; and a story worth telling in its own right. 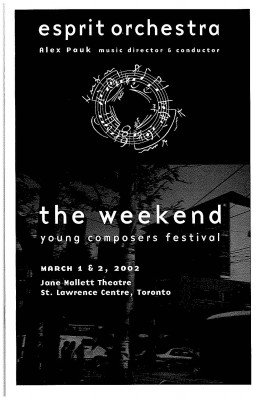 In the middle of this significant anniversary year for Canada’s only full-sized orchestra completely devoted to performing and promoting new orchestral works, we could have chosen to approach this story in a few different ways:

There’s the way this season’s four mainstage Koerner Hall concerts (there’s still one to come, on March 24) reflect the philosophy (and formula) that has given the orchestra its remarkable consistency and astonishing staying power. “My programming is something I always take great care with and pride in,” Pauk says. “Making the programs so that they flow, so that it’s not all one thing. I mean if you did all hard-edged European music all the time, it wouldn’t go over well, so there’s an ebb and flow in a concert, variety …”

Or there was the orchestra’s decisive move from the cramped confines of the Jane Mallett Theatre (the stage used to look like an overloaded life raft for some of the larger works they performed there) to Koerner Hall (twice the capacity) in the very first year Koerner opened. “We’re both celebrating our tenth anniversaries there!” Alex Pauk says with a grin. “You could overpower the Jane Mallett fairly easily” I observe. “Your Xenakis certainly did, when was that, in 2006? I think that was actually the start of the renovations there … your knocking every bit of loose plaster off the walls with the sound.” He laughs. “We certainly did. But you know, we, the tenants had a lot of ideas for those renovations, for the hall itself. And what did we get?
A renovated lobby.”

Or there’s the whole subject of what it takes to keep implausible enterprises afloat (a topic on which we agree to indulge in no more than a few seconds of mutual commiseration and admiration, and then move on).

Of all the possible angles to take on the story, sitting in Esprit’s modest offices on Spadina Ave, with Pauk tapping his fingers on the table for emphasis as he talks, Esprit’s April 5 “New Wave Reprise,” a one-off event at Trinity-St.Paul’s Centre, cuts right to the heart of what makes Esprit, and its founding conductor, tick, so we start right there. 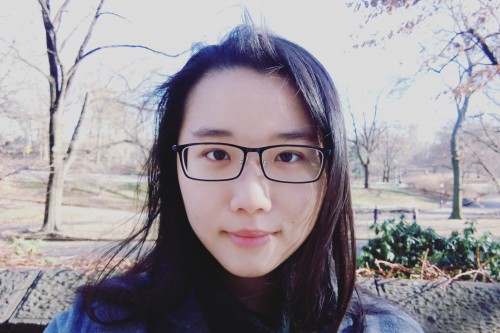 The Orchestra’s own description of the event is fairly straightforward. It will start at 7pm with a keynote address by John Rea, and will feature world premieres by emerging Canadian composers (Eugene Astapov, Quinn Jacobs, Bekah Simms, Christina Volpini and Alison Yun-Fei Jiang). Eugene Astapov and Alison Yun-Fei Jiang (for one work) will also be the evening’s guest conductors.

“What’s the size of the ensemble for the event,” I ask. “It’s a much smaller group,” Pauk replies. “Smaller winds, smaller strings, two percussion, harp, piano. So it’s all the orchestral sounds. What’s interesting is that these same composers, by and large, worked with us last year, for a slightly smaller group of instruments, and will, hopefully work with us again next year, at which time an even larger instrument group will be in play. It’s not to treat them as unable to deal with the orchestra. It’s to create a progression and maintain the relationship. It’s something we have done from the beginning with all the generations of composers we have worked with.”

He pauses, rummages for and reads from a piece of paper, a mission statement of some kind. This kind of sums it up,” he says. “‘The intent, from the beginning of Esprit, has always been to identify, engage, nurture, expose, promote and sustain relationships with creative people.’ That’s been it, basically, from the start of  Esprit as a professional organization, of the orchestra, of the kind of outreach we’ve done. But, except perhaps with our musicians, nowhere more importantly than in our relationship to composers and composing. And you do that by repeatedly commissioning composers’ work, and then reprising those commissioned works over the years. I mean if you trace the record over the years – John Rea, Chris Paul Harman, José Evangelista, Denis Gougeon, so many others. You seldom see their names just once. And we reach out constantly to new voices, and then bring them along, which is what this is about.” 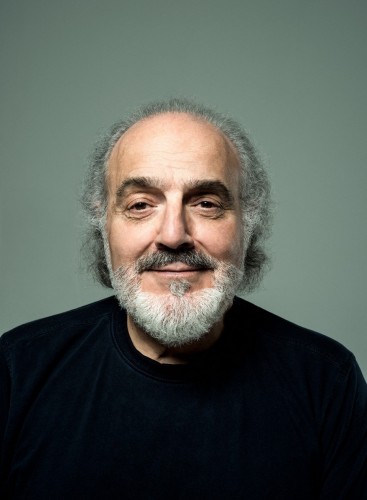 Astonishing as it may seem, Pauk can lay claim to five distinct generations of composers with whom Esprit has maintained this kind of relationship. “Harry Freedman and Harry Somers, along with Murray Schafer, were the senior generation. I was always influenced by those senior composers because they had strong, clear, independent and remarkable voices, and so that’s what I’ve always looked for when I’ve programmed or commissioned.

Then there is my own generation. Alexina [Louie], and John Rea are examples. And then there’s the emerging generation represented by this event. And the next generation of high schoolers that this group of emerging composers will help bring along. Each benefitting from and contributing to the others in a kind of ongoing evolution.”

“So why New Wave Reprise as a title?” I ask (and then almost wish I hadn’t, because the New Wave Festival, launched in 2002 has gone through all kinds of twists and turns over the years). Watching me start to glaze at what begat what and when, Pauk suggests instead that I reach out to Eugene Astapov, who is an alumnus of several of Esprit’s outreach programs, and features as one of the composers (and the main guest conductor) in the April 5 event. 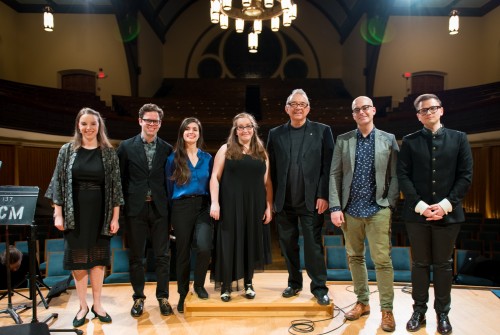 Astapov’s own journey with Esprit started over a decade ago when he participated, as a Grade 11 student, in composition workshops the orchestra hosted at Earl Haig Secondary School (site of Claude Watson School of the Arts), and is a case study in the kind of relationship building Pauk was talking about earlier. “I was fascinated to the extent that I decided to pursue it as a career, thanks to the support of a longtime Esprit friend and collaborator Alan Torok – director of the music program at Earl Haig at the time,” Astapov says.

A year later he began studying at the Eastman School of Music, but stayed in touch with Torok who subsequently re-introduced him to Pauk. As it happened, Esprit was engaged in preparations to host their annual New Wave Festival and commissioned Astapov for it. “It turned out to be a 12-minute work for piano and orchestra, only my second orchestral commission after the Vancouver Symphony. Thinking back now, even though the piece may not have been my strongest, I now realize how it fit like a puzzle with the subsequent works I composed and how the early experience with Esprit helped my understanding of the inner workings of a symphony orchestra.”

After graduate studies at Juilliard, Astapov returned to Toronto for further studies at the doctoral level at the very point in time that Pauk and Esprit were reviving their collaboration with Earl Haig – what was eventually to become the educational outreach program known as Creative Sparks. “In 2015 I joined the community outreach team and was invited to return to Earl Haig as the composition instructor helping students compose new pieces for small orchestra, to be played by Esprit in concert at the end of the school year! As part of this project and example to the students at Earl Haig, Alex extended a commission to me to be performed at the Creative Sparks final concert.”

Once again it was a pivotal commission, due to its use of a pre-recorded element – something he had not done before. “The piece was successful and was picked up by the Vancouver Symphony who performed it the following season,” he says.

It’s a continuing relationship at this point with ongoing opportunities for experimentation: music incorporating electronics; a Creative Sparks commission to compose a work for soprano and string orchestra; the opportunity to conduct that work; conducting unleashing a new passion. “It helped me open and alter my compositional mind and ears in ways that I had never realized was possible: deeper understanding of time signatures and tempi, orchestration techniques that help performers learn music quicker … The list goes on.”

April 5 sees the latest installment in the Astapov/Esprit story. And it’s highly likely it won’t be the last. Which is something that wave after wave of other composers, senior, established, and emerging, can attest to.

John Rea, keynote speaker at the event, was the first composer Esprit ever commissioned. His working title for the address, Pauk informs me, is “Dialogue of the Wind and the Sea - Composers talking to Composers.”

“In other words, making waves” says Pauk. And he should know.