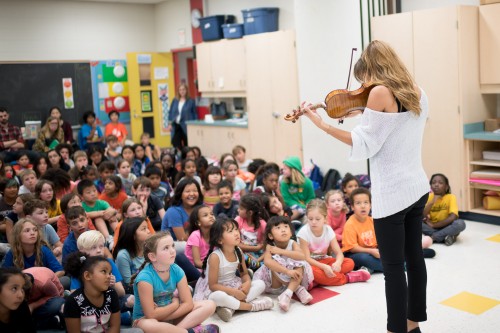 Late September, Scottish violinist Nicola Benedetti came to town for a two-performance engagement with the Toronto Symphony Orchestra (Prokofiev’s Violin Concerto No.2). No stranger to the world’s concert stages, on the Friday afternoon between the two performances, Benedetti proved herself equally at home in front of an audience that many professional musicians would find infinitely more daunting—60 to 70 of the children currently enrolled in Sistema Toronto’s flagship after-school program at Parkdale Junior Public School.

It was a three-part encounter, starting with Benedetti meeting and playing for all the children in the program. In my experience occasions such as these are most nerve-wracking for the teachers in attendance, torn between the demands of impressing “the guests” with the children’s level of  discipline and decorum, and at the same time wanting to celebrate the exuberance and sense of confident ownership the children in the program feel. So prior to Benedetti showing up there was the usual herding and shushing as the children filed in, by class: “straight lines” and “remember we have guests” and “indoor voices, please.”

All such anxieties were dispelled when, accompanied by Aaron McFarlane, the TSO’s newly appointed director of education and community engagement, Benedetti arrived, her 1717 Gariel Strad dangling casually from her hand. She straightaway asked the children what the special signal was at their school when silence was needed (a fluttering downward hand movement, she was shown; “like a fountain,” she was told.)

She asked what different instruments they all played, and told them she was going to play a “theme and variations” for them, by Bach, and that the piece was almost exactly as old has her violin was. She asked if they knew what a theme was, and built on every answer given. She told them they would be practising listening, not because it was polite but because learning to listen, even more than practising the notes, is the most important thing a musician must do. She told them she would play the theme and then she would say “variation” each time she played a variation. And then she played.

No one had to be shushed.

Afterwards, she said “When I started, your listening was very good. But by the time I finished it was wonderful. So thank you all very very much.” Then she took questions, and they were all good questions. My own favourites were “How come you were lifting off your feet?” and (more an observation than a question) “You didn’t smile when you were playing. You are supposed to smile.” Her response to the latter: a question of her own. “Were there any smiley bits in the music? Because if there weren’t wouldn’t it be strange for me to be smiling?” 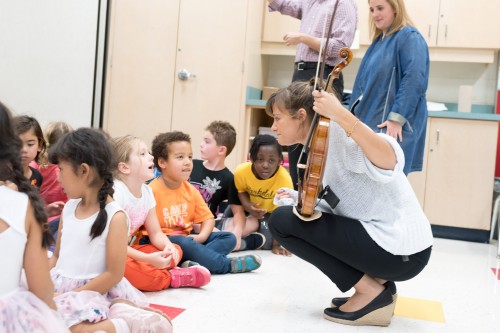 Second stop in the event was the school library where the Sistema senior orchestra was assembled to rehearse the piece for the third and final stop (which was to be a short concert by the senior orchestra in the school gym, for family and the more junior members of the program). Her capacity for instant rapport, genuine engagement with the orchestra, and the ability to zero in on a single teachable thing (in this case encouraging “big sound,” and then evoking it), were all on display.

In the gymnasium concert that followed, she started out by taking her place in the back row of the violin section. After the piece had been played through, she followed up on the library lesson, this time expanding the notion of “big sound” – collective dynamic bravery – by coaxing and coaching the orchestra, and its conductor, to also play more quietly than they would have thought practical under the circumstances.

Looking back on the event after it was over, I found myself reflecting on how effortless the whole thing had seemed (and by extension, how much work probably went into creating the illusion of effortlessness).

Part of the explanation is that Benedetti was on familiar ground. She has had a longtime and ongoing role in the Big Noise Orchestras movement, “Big Noise” being the way the Scottish Sistema movement has branded itself. Altogether there are more than 2,500 children and young people engaging regularly with the four established Sistema Scotland centres, and in addition to the Big Noise orchestras attended by children up to 11 hours each week, they run Baby Noise and Adult Noise programs which enable the Sistema Scotland family to reach as many as possible in the communities where they are based. Benedetti is not only on the Big Noise board of directors but also the movement’s “Musical Big Sister,” visiting schools and conducting musical clinics throughout the U.K. since 2005. 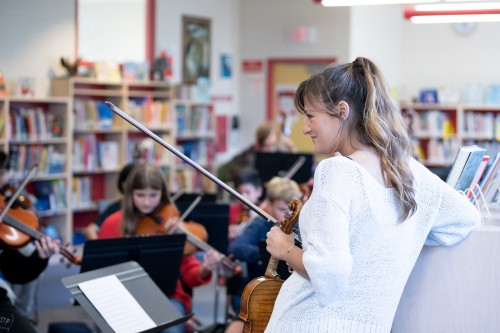 I asked Aaron McFarlane (who coincidentally comes to his education/outreach role at the TSO from a key role with Sistema New Brunswick in Saint John) if their common Sistema roots had helped bring about this particular piece of matchmaking.

“Nicola Benedetti had asked if it would be possible for her to do some outreach as part of her visit to Toronto, and we were happy to oblige,” he says. “The wheels were set in motion well before I joined the TSO in July, but considering my affinity for El Sistema inspired programs, I was thrilled!”

McFarlane’s TSO responsibilities include overseeing everything the orchestra does that is educational or that involves outreach or engagement. “Currently, our main programs are our School Concerts, our open rehearsals (Mornings with the TSO), our Young People’s Concerts, and the Toronto Symphony Youth Orchestra. Beyond the tremendous musicians that make up the TSO, we also have the good fortune to welcome incredible musicians each season from every corner of the globe. We recognize that we are a part of a community, and feel a sense of responsibility to support those who are encouraging the development of young musicians whenever we can.”

Not all musicians, resident or visiting, have the same aptitude or appetite for engagement that Benedetti does – but it was a bright start to the year. “We need to go out of our way to engage with communities that might not otherwise have access to the TSO,” MacFarlane says. “This workshop was a small event in the context of a large organization like the TSO, but it may have made a huge impact on some of the children who got to interact with Nicola Benedetti.”

Raploch Estate is a run-down district in Stirling, Scotland, and is the site of Sistema Scotland’s first Big Noise Orchestra, established in 2008.

“The children I have taught in Raploch really are hugely talented,” Benedetti says, “and I don’t say that lightly. These children have enormous potential. It is phenomenal to walk round the estate and see all these children carrying instrument cases and talking about their orchestra. It is very moving for someone like me. I have always dreamed of our communities experiencing the infectious joy of playing music together. The teachers and the community recognise how these children are shining, and being nurtured every day by the musical environment they now live in.”