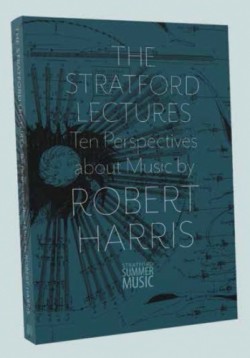 Taking 30 seconds to skim the table of contents of this slim volume is a quick way of getting a glimpse into the range of musical topics to which Robert Harris has turned his delighted attention over the years, as a broadcaster and as a writer.

From the first chapter (Elvis Presley and the invention of rock and roll) to the tenth (Our Beloved CBC: The Future Meets the Past), Harris guides us on a meandering journey through topics as various as the mind of “conservative creator” R. Murray Schafer, the genesis of We Shall Overcome, the Chopin everybody knows and nobody knows, why he detests The Sound of Music, “the truth” of The Magic Flute, and, probably my personal favourite essay among them, a chapter titled “The Goldberg Variations: Pinnacle or Exercise?”

The genesis of the book is interesting in terms of what begat what: it is drawn from a series of 30 musically illustrated lectures Harris has given, starting in 2013, at Stratford Summer Music at the invitation of John Miller, SSM’s founding artistic producer. And before that it had its roots in a radio series titled “Twenty Pieces of Music that Changed the World,” presented as part of CBC Radio’s Sunday Edition.

Each chapter is followed by a playlist of the music that was used to illustrate the lecture as presented to a live audience at Stratford. (Almost all of them findable on the internet, so don’t deprive yourself of the pleasure of listening along!)

The chapters as presented here are not transcriptions, though. Each shows signs of reworking in consideration of the particular medium in which the the lectures are being delivered here, and occasionally with cannily appropriate little updates to the present day. But that being said, it is the writer’s voice that rings through, and true, in all these chapters. Harris has the ability to  hook the listener early on, often with a bit of a story, followed by the key question that the story evokes: “Are there really people out there who don’t love Chopin?” and then follow it, in short order, with a compelling, and usually beautifully crafted, thesis statement: “The great impediment to our taking Chopin as seriously as he deserves is his immense accessibility, his superhuman relatability and musical eloquence.”

And the journey is on, teased out, sometimes tantalizingly tangential but always circling back to its primary point of departure once the case has been made. What, almost without exception, makes the endings of these pieces so satisfying is that one is left, not as is so often the case in  critical writing, with a sense that the writer knows what he is talking about, but with a visceral response to how much he cares about it.

One of the chapters (I won’t say which one) ends with this: “We have lived a musical life in the intervening time, travelled to many places, but the result is not drama, or triumph, but peace.”

Copies of The Stratford Lectures are for sale ($24.95 + 5% GST = $26.20) at L’Atelier Grigorian, (70 Yorkville Avenue, Toronto), and by mail directly from Stratford Summer Music, with postage on a case-by-case cost basis, through info@stratfordsummermusic.ca.