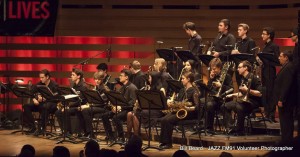 On April 11, JAZZ.FM91 presented “JAZZ LIVES: A Century of Nat ‘King’ Cole” at Koerner Hall. JAZZ LIVES, for the uninitiated, is the moniker given to JAZZ.FM91’s “premier fundraising concert,” and the theme for this year’s iteration – which was the event’s 14th annual occurrence – was, as the title suggests, a celebration of the great pianist/vocalist Nat King Cole, born (nearly) a hundred years ago in 1919. Although past JAZZ LIVES concerts have featured notable international guest stars such as Gregory Porter, Terence Blanchard and Pat Metheny, the performers on April 11 were mostly local musicians, and provided an illuminating cross-section of artists who have found a place in the extended JAZZ.FM91 family. While the tribute format gave the evening a clear conceptual framework and enabled a variety-show structure, it was, ultimately, the individual artistic choices of the participating musicians that made the evening memorable and reaffirmed the central position that JAZZ.FM91 holds in the Toronto jazz scene.

The evening started with pianist Robi Botos, who played a beautiful solo rendition of “When I Fall In Love” before embarking upon a bouncy, medium-up, 7/8 version of “L-O-V-E” with drummer Mark Kelso and bassist Marc Rogers, which was capped off by brief quote of “It’s Only A Paper Moon.” Placing Botos’ performance at the beginning of the program was an intelligent choice: it effectively set the tone for the rest of the night, illustrating that, although the event was a celebration of Cole, it was also a celebration of the unique abilities of the performers in attendance.

Following Botos, Drew Jurecka and Mary Margaret O’Hara each performed (individually) with the house band, made up of Kelso, Rogers, guitarist Eric St-Laurent and pianist Lou Pomanti, after which Bill McBirnie took the stage for a version of Poinciana, eschewing the slower ballad version recorded by Cole in 1961 for the iconic Vernel Fournier groove from Ahmad Jamal’s 1958 “At The Pershing: But Not For Me” album. After a cool, understated version of “Straighten Up and Fly Right” from singer Danny B, Jackie Richardson took the stage to perform “Nature Boy” with Bill McBirnie and the house band. Richardson has a powerful, dynamic voice, with excellent control throughout her considerable range. She performed two additional songs – “Steal Away” and “Every Time I Feel The Spirit” – and was able to effectively ramp up the excitement during her time on stage, providing one of the night’s clear highlights, and resulting in a standing ovation from the audience as she closed the first half of the event.

Of particular note in the second half of the concert was the JAZZ.FM91 Youth Big Band, led by musical director Jules Estrin, which performed “Orange Colored Sky” with Jurecka and “The Late Late Show” with Ori Dagan. The Youth Big Band, in its tenth year of operation, is a free educational program for qualifying middle- and high-school students, providing the opportunity to play in the big band and to participate in a variety of workshops and performances with top music educators and guest artists. The group displayed maturity far beyond its years, particularly in the rhythm section, which generated exciting, propulsive time, and in the saxophone section, led by lead alto saxophonist Jacob Chung, who took an impressive solo on “The Late Late Show.”

Other second-set performers included The Heavyweights Brass Band, who began the set by playing in the audience and gradually making their way to the stage, vocalists Alex Pangman, Lori Cullen, and surprise guest Marc Jordan, who, after remarking on the value that JAZZ.FM91 brings to the community, sang a compelling, stripped-down version of “The Nearness of You.” Pianist Thompson Egbo-Egbo also performed, playing a sweet, rhythmically strong version of “Let’s Fall In Love” that blended some of Cole’s more traditional stylings with a few modern touches. The evening culminated in a return of most of the performers to the stage for a version of “Route 66,” led by Richardson, with enthusiastic audience participation.