Before the existence of public museums, gentlemen of a certain social standing would compile what they called a “cabinet of curiosities.” Like a museum in that it was a room, or rooms of artifacts devoted to culture in natural history, it differed in that the collection depended entirely on the whim of the gentleman collector and could include anything at all related to history, archaeology, geology, religious relics, antiquities and works of art. It was an approach to culture that depended on the collector’s freewheeling sense of enthusiasm.

One could feel it in the air at the annual Toronto Early Music Fair, where the wide-ranging talents of a diverse group of musicians were on display at Montgomery's Inn, along with a pile of antiques, musical scores and musical instruments, all curated as a labour of love by Early Music Toronto (EMT) and Frank Nakashima.

The Toronto Early Music Fair is a day devoted to intellectual play and artistic curiosity, and Montgomery's Inn is the perfect place to show off some great music. It's full of small, wooden rooms that provide superb acoustics and an intimate setting for small-scale concerts, and the inn itself is part of Toronto's history dating back to the 19th century (plus, essential for any early music concert,  there are plenty of historical re-enactors in period drag running about). EMT takes full advantage of the inn by putting together an all-day line-up of musicians incorporating a big-tent approach to early music that can range (using this year as an example) from medieval to folk to baroque.

The Grandi Project from Bud Roach on Vimeo.

One musician I was grateful to hear was the countertenor Bud Roach (anyone who gets a chance to hear him perform is lucky indeed). Roach's performance was a mini tour-de-force consisting of  songs from 17th-century Venetian composers Alessandro Grandi, Giovanni Felice Sances and Carlo Milanuzzi. Roach's voice is clearly suited to this repertoire -- he can sing high -- and for all appearances, Roach has researched his repertoire very well. His singing delighted the audience and with good reason – Roach sings passionately with a sincere conviction behind the emotions conveyed in the music; and he was clearly charming the audience in his descriptions of some very overwrought lyrics. 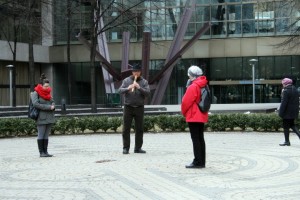 Michael Franklin is another early music specialist whose talents deserve special recognition. Franklin is primarily a player of medieval music on hurdy-gurdy and recorder, but the presentation I caught focused primarily on wind instruments that were historically made and played by North American native communities. This was a fascinating introduction to Native American music, and I'm hopeful, after seeing Franklin's presentation, that musicians will continue to research and perform on these instruments. Besides promoting indigenous Canadian culture, these flutes are exceptional works of craftsmanship and have a beautiful sound. Franklin has clearly done an extensive amount of research into them, plays them very well and gave an articulate and informative presentation on the history of the flutes and their role in Native culture.

Besides a folk choir, an Irish folk group and a workshop on recorder building (which I was sorry to have missed), the afternoon did also include two conventional baroque instrumental groups of the solo violin and basso continuo variety. One of these, the Mosaico Baroque Ensemble, is a student group led by the veteran theorbist Ben Stein. Given that they were clearly new to early music and their instruments, they did a decent job of some very challenging repertoire. The Telemann Paris Quartets and Jean-Fery Rebel's Caractères de la Danse are hard to play artistically and with a good sense of ensemble; to play them both cold as a newly formed ensemble is to set the bar especially high. Still, the players of Mosaico seem like promising musicians and if they keep working at performance practice they'll be a welcome addition to the Toronto early music scene. I wish them the very best of luck.

Harmonie, another amateur group, was also on hand to play Dutch music of the 17th century. They took a feckless approach to the music, effectively banishing dynamics, counterpoint and ensemble playing in favour of a merry bash-through. After witnessing Harmonie play, I learned at least one intriguing aspect of the concert experience: after watching an ensemble's harpsichordist chewing gum on stage during the performance, any notion that the group cares at all about the quality of the music performed is effectively and permanently dispelled.

For this reason it’s possible that I can't claim that the Toronto Early Music Fair is a sure-fire guarantee of listening to top-rank musicians for an entire afternoon, but I recommend it to anyone who enjoys music or who is just looking for something to excite their curiosity. One small critique, however: how about advertising the fair earlier and publishing the program online ahead of time? I might just plan my day around it next year.