You can view a video of this entire conversation, or listen to a podcast of it by clicking here. 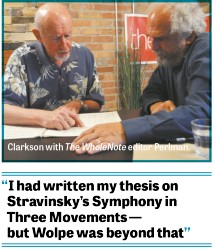 At some point in my recent conversation with musicologist Austin Clarkson he used the phrase “leapfrogging series of interactions” to describe the relationships among four composers, Anton Webern, Stefan Wolpe, Morton Feldman and John Cage.

“Stefan meets Anton and Morty meets John” is the title of an October 6 concert and accompanying seminar, both curated by Clarkson, to launch the 43rd season of New Music Concerts with whom Clarkson has had a relationship spanning more than two and a half decades. While the four composers in question never all met, the intersections of their lives and work make for an interesting daisy chain of musical thought and circumstance.

Clarkson explains: “Cage had met Morton Feldman at a concert in Carnegie Hall conducted by Dmitri Mitropoulos with the New York Philharmonic playing the Webern Symphony Op.21. They both left the concert at the same time and Morty went up to John and said, ‘Wasn’t that beautiful.’ Because he [Feldman] had already seen John Cage at a meeting at one of the musicales at the Wolpe apartment uptown, and had not spoken to him. But this time he spoke to him.”

The date of this concert was January 26, 1950, and it was, by several accounts, a memorable occasion. Music writer Alex Ross, for one, in his book The Rest Is Noise asserts that the two left the concert early, equally disgusted at the reaction of the New York Phil audience to the Webern piece.

“Sounds as if it was in that mandatory ‘before the intermission’ slot for new music” I posit to Clarkson, and he briefly nods assent to the notion before carrying on with his story:

“So Feldman at that time was writing a string quartet also, which he came to call Structures, and he by that time had left the Wolpe studio — he wasn’t taking lessons anymore — and he was kind of trying to find his own way, very much involved with the New York painters. And so Cage invited him to his apartment down on the East River, and Morty showed him this draft of this string quartet. And Cage said, ‘Well how did you make that?’ He was fascinated. And Morty said, ‘I don’t know.’”

Leapfrog, indeed, among the composers; even more interesting, as it emerges during the conversation, is the way in which Clarkson’s own musical life has been inextricably interwoven with the lives of his musical subjects, above all Wolpe.

“Well, I discovered his work in Sam’s record shop when it was on College St., west of Bathurst. And it was 1957 or ’6 when I was working in Saskatchewan at the University of Saskatchewan in Saskatoon (my first job after graduating from Eastman). And I was thumbing through the new releases and I picked up this LP and saw the face of this composer in many different angles and moods, from laughing to looking very pensive, and he had an open shirt, and he was so out there. And I thought this must be interesting, so I turned it over, and there Aaron Copland had a blurb saying that Wolpe was one of the most important composers of this era. So I thought well I’ll try this and I took it home and played it. And I thought it was absolutely ... bizarre. I could not understand it. I had gotten as far as Bartók and Stravinsky — I had written my thesis on Stravinsky’s Symphony in Three Movements — but Wolpe was beyond that. And when I played it for my friends they thought this is absolutely ridiculous. So then I get to New York and I’m studying for my doctorate at Columbia, and my roommate who was a pianist studying and teaching at Juilliard said would I like to join a small group of students who are studying with this composer who needs money because he is very poor, and my girlfriend is a student of his wife’s. And I said what’s his name? And he said, Stefan Wolpe.”

“When I first went into his room, his third floor walk-up, on West 70th St., it was like walking into a seismic event,” Clarkson says. “This man radiated the kind of energy that you didn’t believe people could provide — just like an everyday thing. Also he revealed that music was beyond something I had ever experienced up until that point. And I realized that it was going to be really a life’s work to become adequate to this way of being in music. So that’s where it began.” 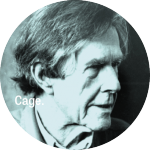 Wolpe died in 1972 of Parkinson’s, and, as Clarkson explains it, “So I finished my Ph.D. ... and I was the only musicologist really in his circle. There was one other but she was a really terrific pianist and she was devoted to that career, although she did a great deal. So it turned out that I had to become a Wolpe specialist. There didn’t seem to be anyone else to do it.”

Wolpe’s pivotal role in this game of composer leapfrog becomes more clear as Clarkson describes the program for the October 6 concert.

“The first piece I chose was a Concerto for Nine Instruments that Wolpe wrote while he was studying with Webern ... in Vienna,” Clarkson explains. “He’d arrived in Vienna as a refugee from Nazi Berlin, just in September of 1933, and he had three months with Webern before the Austrian police expelled him from Austria with the threat to deport him back to Germany. And so in those three months he composed this concerto for nine instruments. And at the same time, curiously, Webern was composing his own concerto which turned out to be for nine instruments eventually. So there are those two key pieces, the Wolpe concerto and the Webern concerto, both for nine instruments, almost exactly the same instruments.”

“And then the next piece chronologically is John Cage’s String Quartet, and it’s a piece he wrote beginning in Paris when he was there on a fellowship to study at the Bibliothèque Nationale the music of Satie, but while he was there he met Boulez and he went to the studio of Messiaen and played his Sonatas and Interludes and began his string quartet. And he finished it the next year in 1950.” 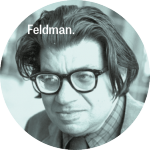 It’s from “a whole period of classical Cage,” Clarkson says, “that people don’t know much about. Because after he turned to indeterminacy he became the Cage we all know today ... The string quartet is a masterpiece. It’s a classic. And yet we don’t hear it very much because it’s the other Cage that we know more about, that we hear more about.”

The next piece on the program is Feldman’s Structures. Clarkson, for one, doesn’t buy Feldman’s comment to Cage that he (Feldman) “didn’t know” how he made the piece. “In fact I brought it if you want to see it,” Clarkson says. “Actually Morty knew pretty much what he was composing, because I have analyzed it and I can see how he was adapting Wolpe’s way of working with shapes for his own imagination. So then ... Feldman really became a member of the Cage circle, but he said Wolpe was totally okay with that.”

It was by no means a “given” that Wolpe would have been comfortable with Feldman becoming part of Cage’s circle. “Cage and Wolpe — they had real arguments, in public,” Clarkson explains. “They were famous for their shouting matches and they happened on the streets of New York, and conferences, and Darmstadt, and it was ... yeah. But the argument was never over whether music was pure thought in itself. For Cage, it had to be a piece of ... the nature out there, which is exactly what Webern said. ‘Art is an expression of nature, but as seen through human nature.’ ... To that extent they both agreed, Cage and Wolpe. It’s just that they had different natures. And so their music came out totally differently.” 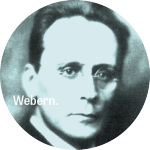 And so it was that Feldman moved into Cage’s circle without acrimony from Wolpe. “He [Wolpe] was totally open, he didn’t feel aggrieved or somehow that Feldman had let him down, so Feldman then worked with Cage ... not worked with him, but kind of was in his circle with the artists and going to the artist’s club downtown on 8th St. and developing his unique imagination in a way that Wolpe hadn’t yet been able to support. And the curious thing is that in the later 50s, Wolpe came to see the virtue of the kind of music that Feldman was writing, and developed his own notion of what he called the ‘discontinuum.’ And so the final piece on the program is going to be this Wolpe piece for chamber orchestra, Chamber Piece No.1, in Wolpe’s late style, which is like moment form, each moment is kind of unto itself.”

The work is from a period in Wolpe’s life, post-war Germany at Darmstadt in the summer, where Wolpe, according to Clarkson, was able to close some important circles: “He found a new life,” Clarkson says. “Because he brought American expressionism [back to Europe], and there he found Webernian structuralism, and he returned to Webern in a way that he hadn’t been connected for 20 years — it was a marvellous rediscovery for him. And in fact this piece, the Chamber Piece No.1 that you will hear on the concert, is an homage to Webern. And it uses the same pitch set from Webern’s Concerto and it starts with the same horn interval that the third movement of the concerto begins with. And then later in the score, he’s written ‘Oh, ... Webern!’ on the manuscript. So it is really very touching to see that the journey is now somehow closed and that he’s come to a new understanding of Webern where he can put Webern into this moment-form environment and still have him live and breathe.”

One senses that the October 6 concert closes some circles for Clarkson too. “Exactly 20 years ago, we did a four-day festival of Wolpe’s music,” he says, “where we had symposiums, seminars, concerts, workshops; we had a gallery of marvellous performers, Peter Serkin came up, we had performers coming from all over. And out of that we produced a book and there were recordings so it was a major event. But since then, not so much.” 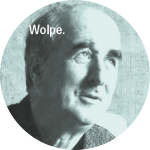 For a musical generalist like me, the October 6 concert promises to be a journey through a lot of unfamiliar territory, somewhat akin, perhaps, to Clarkson’s own first encounter with Wolpe’s music back in 1956 at Sam’s on College St. But there’s considerable comfort in now having a clearer sense of the individual behind the concert’s curatorial steering wheel. “I knew Morton Feldman very well,” says Clarkson, “and John Cage I knew also. He would often visit York University where I taught for 25 years. And David Tudor, also, who was the pianist who actually was like the linchpin between the Cage and Wolpe groups, because he played all their music.”

“It’s very interesting: what Feldman says is of most importance to him (and this is a way to prepare for this concert) is listening. He’s concerned only [with] what happens when you listen. And that there is a different kind of listening that happens in different kinds of music. And his kind of music demands the most extreme listening because he maybe has a sound here, and then nothing for a while, and then another sound, and you have to figure out, well, what’s happening here? What’s in between? So that listening to a Feldman piece is a totally different experience than listening to a Wolpe piece. But if you play Feldman very fast, and Wolpe very slow, actually you’ll hear a connection.”