Composer ann southam, who died November 25, 2010, continues to live through her music, appearing on concert programs with an insistent frequency far beyond the initial spate of “tribute concerts” one might have expected. What is becoming clearer with the passage of time is that the music, as much as the memory, is of enduring value. That being said, two gifted pianists in the community, Christina Petrowska Quilico and Eve Egoyan, are doing much to keep the Southam legacy alive, both through their recordings and through live performance. 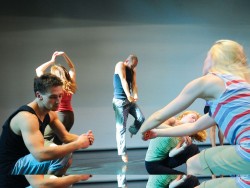 This month, for example, on April 1, with the Kindred Spirits Orchestra in Markham, the indefatigable Petrowska Quilico performs three Southam works as part of Kindred Spirits’ one-night “New Music festival” concert. And then, April 25–28, she provides the entire accompaniment to a new ballet, Rivers, choreographed to Southam’s music by Toronto Dance Theatre’s Christopher House. Egoyan, meanwhile, brings Southam’s Simple Lines of Enquiry to a benefit concert for MusicWorks magazine, April 19 at Gallery 345. Both are events worth saying more about.

I first became aware of the TDT Rivers project last fall during a 20-minute video interview I did with Petrowska Quilico for The WholeNote’s ongoing video interview series, Conversations@TheWholeNote.com.

I have to admit, the scope of the undertaking didn’t fully register at the time. House has worked for a year with Petrowska Quilico and then TDT’s ten dancers to create what he calls “a fluid and unpredictable counterpoint to the music, reflecting the rushing cascades, luxuriant eddies and attentive stillnesses in the score … alternating between large-scale, kinetic strokes and intricately-crafted movement conversations. I hope to build a work” he says, “in which both music and dance retain autonomy yet their marriage feels surprisingly, deliciously inevitable.”

“I think that is a brilliant quote” says Petrowska Quilico. “Christopher and I have met many times during the year and began with a first rehearsal in September. It was a revelation for the dancers to perform with live music. They had previously been using my Centrediscs CD of the complete Rivers. I felt an unbelievable electricity while playing. Although I couldn’t really watch the dancers I felt the vibrations of their movements or their stillness. This is real chamber music, intimate, structured yet spontaneous in a mutual give and take. The dancers take their cue from my music and tempo and I adjust the music and tempo to their movements.”

Southam’s music, she says, is what makes it all possible. “I believe that this is her masterpiece, written in her prime and showing her mastery of fast and slow music. I love performing these pieces more than any other of her works. I never tire of the changing patterns and the spontaneous and improvisatory mood of the music.”

House and Petrowska Quilico collaborated on the choice of music structuring it so there is an ebb and flow. Rivers will play as an hour long piece “with swirling fast sections and reflective intimate and introspective segments” Petrowska Quilico says. “I can’t wait to perform with the dancers.”

As mentioned, Rivers will play at the Fleck Dance Theatre, Harbourfront, April 25–28.See the listings for details.

By comparison, Eve Egoyan’s evening of Ann Southam this month will be a very intimate affair, with all eyes on the piano, and in a venue entirely befitting the piece. Of Egoyan’s earlier performance of Simple Lines of Enquiry in November 2009, reviewer Stanley Fefferman wrote, for showtimemagazine.ca, “being in the concert hall while Eve Egoyan plays the 12 movements of Ann Southam’s Simple Lines of Enquiry for solo piano is like being in an art gallery where 12 abstract canvases hang on white walls. Just as the experience of visual art occurs in a silent gallery, so these sound paintings generate an atmosphere of silence. This results in a kind of melting of the affections, as if Ms. Egoyan’s concentrated discipline develops a musical posture that enables a sense of fluidity to flow towards relaxation and the possibility of bliss.”

Fitting, then, that this performance should actually be in a gallery, with paintings on the walls. Gallery 345 continues to develop as a musical venue, attracting an eclectic range of performers with its intimacy and (literal as well as metaphoric) lack of veneer. Great, too, that the event is a benefit for MusicWorks magazine, a true original and one of the best little magazines around.

Speaking of intimate events, I’ll be holding my breath that the Toronto Public Library labour dispute resolves itself speedily (and satisfactorily), because the Toronto Reference Library is getting set to host the second annual New Music 101 — four consecutive Monday evenings, in the Elizabeth Beeton Auditorium, commencing April 23. The series, devised and curated cooperatively by the Toronto New Music Alliance, was hosted last year by music journalist John Terauds, formerly a Torstar standout, and now, among other things, the host of one of the better (and busier) musical blogs around — musicaltoronto.org. “The only reason I’m not back this year is that I’d committed myself to teaching on Monday evenings before they asked me to return for this year’s series” Terauds explained. “I thoroughly enjoyed last year’s series. It ended up providing a cross section of new music genres and performance styles while also providing people with an intimate setting in which to interact with the artists.” (This year’s host will be another Toronto journalistic standout, Robert Everett-Green.)

Format this year will be the same as last year: the events run for one hour, with two new music presenters sharing the time. A short work, or work in progress, is introduced and performed, with time for discussion afterwards. April 23, for example, New Music Concerts will reprise a commissioned work for two accordions, performed by Joe Macerollo and Ina Henning, from their opening concert of the season. And the Array Ensemble will serve up selections still being rehearsed, for an upcoming concert (in partnership with Toy Piano Composers), April 28 at the Music Gallery.

“This [approach] is, in my opinion, the best way to break down many of the inhibitions people have about sampling new music,” Terauds says. Best of all, because the Library itself does the outreach to its members, the series reaches a genuinely new audience.

So, as I say, I’m holding my breath that the current ugliness of city hall politics doesn’t cut off at the knees a truly hopeful initiative. 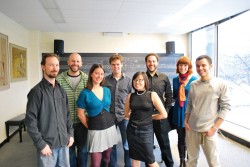 Getting back to the aforementioned Array/Toy Piano Composer concert at the Music Gallery April 28, Toy Piano Composers may sound like a flippant name, but the collective’s intentions, while infused with light-heartedness, are certainly not flip. Formed by Monica Pearce and Chris Thornborrow in July 2008, TPC is now a a ten-composer group, has presented 12 concerts and 85 new works, and has collaborated with TorQ Percussion Quartet, junctQín keyboard collective, and the Sneak Peek Orchestra to name a few. Co-Founder Thornborrow had this to say about the upcoming Music Gallery event. “We are honoured to be collaborating with the Array Chamber Ensemble. They have been dedicated to the performance of new music for 40 years and it’s very exciting for us to be writing for an ensemble that has been so inspirational with their daring concerts and composers’ workshops. I think the audience is in for quite a memorable evening.”