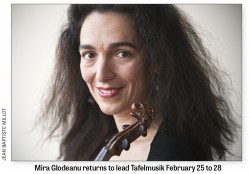 Dare one ask if there will come a time in music history when the historically informed performance practice advocated by the early music movement becomes no longer necessary? Devotees of capital-C classical music may well wonder why the early music revival is so preoccupied with bringing back minor composers from the 17th and 18th centuries, but stops, officially, with the death of Bach in 1750.

It’s a worthwhile question to ask: there were, after all, treatises on musical practice, like those beloved by the early music movement, written well into the 19th century; and the instruments of a Romantic-era orchestra were no more significantly different from those of their predecessors as they are from an an orchestra of today.

Fans of Tafelmusik, for example, might once in a while dare to whisper, given the group’s near-canonic range of orchestral literature, that the group should take on more conventionally classical repertoire for a symphony orchestra. And indeed, they sometimes do. This month, as an example, Tafelmusik is giving the concertgoing public the opportunity to hear an early music take on the Classical and Romantic eras. Hopefully they will both bend the ears of a few traditionalists with a rare foray into 19th century repertoire that features works by Brahms, Beethoven and Rheinberger, and will offer a fresh take on the works in question for hard core classicists more accustomed to hearing the same repertoire kicked to death by over-large orchestras in unforgivingly large halls. If there’s an early music group in Toronto that’s qualified to take on Romantic repertoire, Tafelmusik is it – the group cut its teeth on Haydn and Mozart in the early ’90s, making it the most forward-leaning ensemble on the Toronto early music scene.

Tafelmusik’s concert, on February 4 through 7 at Koerner Hall, features German conductor Bruno Weil, who has been leading the group through the Beethoven piano concertos and symphonies since 1996, and is now back to complete the cycle with a performance of the Ninth Symphony. While it’s easy to dismiss Beethoven’s Ninth as the warhorse of orchestral concert programs (who can’t hum the Ode to Joy?), it’s not often that one gets to hear it done by a period ensemble on classical instruments. From a performance practice perspective, The Ninth is also the gateway to the 19th century, and the choral works chosen to accompany it in this program complement Beethoven’s final symphony perfectly. Brahms’s chromatic, fugal Warum ist das Licht gegeben and Rheinberger’s beautifully imitative Abendlied are both delightful to listen to and entirely appropriate for an early music group – Brahms’ well-known penchant for trying to compose in the style of Bach is quite evident here, and the Rheinberger sounds like a Palestrina motet updated for a 19th-century audience.

Weil is also a fine conductor with the unique ability to straddle both early music and modern territory deftly. Having him back to conduct the Ninth in order to complete the Beethoven cycle celebrates a particularly successful artistic collaboration between the conductor and the orchestra. Who knows? Maybe we will see Weil next year conducting Tafelmusik in a Schubert or Brahms symphony.

If you miss this particular orchestral extravaganza, you might still want to catch Tafelmusik’s other concert later this month. Like the earlier concert, it features the group doing orchestral repertoire that stretches hard-line early music definitions; this time Mozart, not Beethoven, is the evening’s dedicatee. The Romanian violinist Mira Glodeanu will return to lead the group in a concert of Mozart’s greatest hits – including Eine kleine Nachtmusik, Symphony No. 40 and his Sinfonia Concertante. It should be a worthwhile evening for similar reasons to the Beethoven concert – like Weil, Glodeanu is a gifted musician with an ear for Classical repertoire, and it will be interesting to see what kind of performance she can pull out of the ensemble. And once more, it’s a chance to hear an early music take on some orchestral standards by a group that will do a first-class job. Maybe that’s why Tafelmusik keeps getting mistaken for the TSO. You can catch Tafelmusik doing Mozart at their more usual venue, Trinity-St. Paul’s Centre, February 25 to 28.

The Way of the Consort: It’s been 16 years since the Toronto Consort released their medieval album The Way of the Pilgrim, and if you’ve never heard the disc before, you’ll get a chance to hear it in concert February 12 and 13. The Consort is re-releasing the album this month on the Toronto-based independent label Marquis records, and celebrating the occasion with a concert/CD-release-party at Trinity-St. Paul’s on February 12 and 13 at 8 pm. The Way of the Pilgrim features songs from the 12th and 13th centuries, from Spain, France and Germany, sung by crusaders, travellers, and yes, pilgrims to the Holy Land. The Way of the Pilgrim became something of a seminal album after its release in 2000, and it ranks as one of the best recordings of medieval music by a Canadian group, so it’s good to see that the Consort is giving the disc some publicity as well as a live performance.

Scaramella pardessus: The social conventions around what is considered appropriate behaviour often seem confusing to outsiders or succeeding generations. In the ultra-conservative conformity of 18th-century France, it was apparently considered unladylike behaviour for a woman to hold a violin on her shoulder, or worse, under her chin. The elegant solution the French came up with was the pardessus de viole, a miniature version of the viola da gamba that could play music in the same register as the violin while being held daintily in the lap. On March 5 at 8pm in the Victoria College Chapel Scaramella pays tribute to this eccentric instrument with a concert of French music composed just for the pardessus de viole. Montreal-based gambist Mélisande Corriveau joins New York harpsichordist Eric Milnes and Toronto’s own Jöelle Morton for a concert of French 18th-century music. An excellent chance to hear a rare instrument played by a virtuoso, so be sure to check it out.

Pisendel: Sometimes you can judge someone by the company he keeps. We might not appreciate the music of Johann Georg Pisendel very much today, but the Dresden composer and orchestra leader was a colleague and friend to a galaxy of talent in 18th century Germany and Italy, including Bach, Vivaldi, Telemann, Zelenka, JG Graun … you get the idea. Although Pisendel was more of a bandleader and violinist than a composer – he left us with just a handful of violin concertos, orchestral works and sonatas – he had the good fortune to be a musician in a city where culture counted for a lot. His employer, Augustus the Strong, may well rank as the most extravagant man in history, and spent lavishly on cultural events ranging from court balls, Venetian-inspired masquerades, and animal-tossing contests (?) in order to entertain a wide succession of mistresses, to a court orchestra, directed by Pisendel and paid for by Augustus, which was one of the finest, and largest, in Europe. On February 28 at 2 pm at Gallery 345, my group, Rezonance, presents a concert of some of the finest music of the late Baroque, all dedicated to a man who was one of the greatest conductors of his day. If I may be permitted to blow my own (modern) horn for a moment, Rezonance is an energetic ensemble that features up-and-coming talent in the city playing insightful and interesting concert programs. If you’re interested in an informal, fun concert of chamber music, this concert promises to be both informative and entertaining.