Despite the fact that musicians are some of the most dedicated of professionals, no one really pays sufficient attention to the fact that we are also incredibly strange. I mean it. Musicians are some of the weirdest people you are ever likely to encounter socially, and I like to think it helps. Toronto hero Glenn Gould famously had an obsessive fear of illness which drove him to dress in sweaters and coats in mid-summer, and an equally obsessive desire to hear every possible melody line in a piece of music which led him to record some of the most original recordings of Bach of the 20th century. Obsessive behaviour comes with the artistic territory – if you’re going to devote your life to mastering an instrument, a long-dead composer, or an artistic tradition that’s been lost for several hundred years, it kind of helps if you don’t worry about looking like a bit of a nut socially, or indeed not having much of a social life at all. 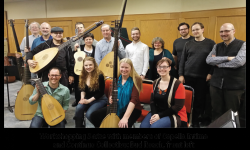 Bud Roach: One Toronto-based artist who has let his obsession run wild is Bud Roach, who to the best of my knowledge possesses all of the social graces one needs (like I would know), but is nevertheless very, very dedicated to Italian vocal music circa 1600. I caught up with Roach one evening in January to discuss his next concert with Capella Intima, a re-creation of Marco da Gagliano’s Dafne, which ranked as one of the most avant-garde musical art works of its time when it was premiered in 1608. Dafne, you see, was written in a musical form that da Gagliano’s Italian contemporaries couldn’t understand, and they called the work a favola in musica (a musical fable). Later generations of Italians, like music-lovers elsewhere in Europe, would later find a new name for this sung fable: an opera.

“Marco da Gagliano has all the traits of a composer of the Florentine camerata,” Roach explains, referencing the artistic movement that advocated for a new, dramatic form of vocal music in 17th-century Italy. “His music has long, singing recitatives and focuses on emphasizing the text. His music is really as much about poetry as it is about singing.” Dafne was one of the first operas ever written, but da Gagliano didn’t take that particular prize: he was beaten out by Jacopo Peri, who wrote Eurydice just eight years earlier in 1600.

Roach founded Capella Intima mainly to perform early-17th-century Italian music, and while Toronto audiences may be familiar with the major works of the time and place (think Monteverdi’s Vespers and Orfeo), Roach argues that there were lots of equally valid composers from that time who have been unjustly forgotten by contemparary audiences. When I ask him why Toronto concertgoers should care about early opera, he goes straight to the point. “The beginnings of Western classical music were in 1600. Anyone who subscribes to the COC should know Dafne, and Monteverdi and his contemporaries,” he says. Capella Intima will perform Dafne once in Hamilton, at MacNeill Baptist Church at 2pm on February 22, and twice in Toronto, at Trinity-St. Paul’s Centre at 2pm on February 23 and as part of the COC’s noon-hour concert series on February 26 at the Four Seasons Centre for the Performing Arts.

Windermere: Another early music group performing concerts that are somewhat off the beaten path is the Windermere String Quartet. You would think Haydn and Mozart string quartets would be standard repertoire for early music players, but somehow in the last 20 years early music decided to stop at Bach and the late 18th century became the sole territory of modern players, beyond which few historically informed performers dare to pass. Thankfully, this particular string quartet isn’t afraid to play Mozart and Haydn on period instruments, and regular concertgoers should at least be grateful that they can give audiences the option of a refreshing perspective on two of the founding fathers of Western classical music.

Violinist Elizabeth Loewen Andrews explains the difference between playing classical music on modern and period instruments. “You lose a lot of the sense of texture playing with vibrato and sustaining the lines,” she says. “The parts get covered up and you don’t get to see how a composer like Haydn or Beethoven used the different instruments to make the music denser or more sparse.”

The Windermere Quartet recently concluded a six-part concert series comprising the Haydn opus 33 quartets, the Mozart “Haydn” quartets and Beethoven’s opus 18 quartets. Their next concert – at St. Olave’s Anglican Church, February 16 at 3pm – will be less ambitious in scope, consisting of the Haydn String Quartet Op.76 No.1 and the Mozart Flute Quartet in D Major K285, joined for the latter by Alison Melville on flauto traverso. This concert will happen at St. Olave’s Anglican Church at 360 Windermere Ave. on February 16 at 3pm. And hey, if you think playing Haydn and Mozart on period instruments isn’t a good idea, just remember that Tafelmusik got their start the exact same way.

Scaramella: I’ve talked about Scaramella in this column before, and the ensemble’s programming is strange and interesting enough that I think they’re worth mentioning again. Joëlle Morton has put together a concert featuring music from 18th-century Vienna; with compositions by Karl Ditters van Dittersdorf and Haydn, it should be excellent. What’s so original about this particular concert? It’s capital-C classical music composed without violins. Morton will be playing the Viennese double bass (I had no idea this was an instrument distinct from the regular double bass), and while she will be joined by Mylène Guay on classical flute and Derek Conrod and Christine Passmore on natural horn, there will be no upper strings in the whole concert except for a lone viola (Kathleen Kajioka). Morton is known for curating some of the most innovative concert programs on the Toronto early music scene, and given that you would usually associate Viennese classical music with string quartets (see above) and symphonies, this concert will be an eccentric program of music you won’t get a chance to hear again for a long while. Scaramella will present this concert at Victoria College Chapel on February 1 at 8pm. Give it a shot.

To cleanse your palate for the month’s adventurous and strange, Tafelmusik will present a mostly-Bach program on February 1 at 8pm and again on February 2 at 3:30pm at Trinity St. Paul’s Centre). The concert will feature the Suite for Flute and Strings and Bach’s Concerto for Flute, Violin, and Harpsichord. Given that Bach was the most consistent composer of all time, it’s extremely unlikely you’ll be disappointed. Finally, if you prefer renaissance music, the Musicians in Ordinary will be playing a concert at Heliconian Hall for lute, voice and strings that features some of the most well-known composers of the English Renaissance including William Byrd, Orlando Gibbons, Thomas Campion, and John Dowland, so it’s also a safe bet you’ll hear something you like on the program.