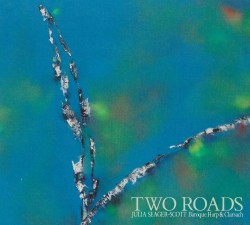 Handel’s Harp Concerto in B-flat Major, third movement, is the only non-arrangement performance here. Seager-Scott writes that she learned this staple of the pedal harp repertoire as a teenager but was thrilled to relearn and record it as originally written for triple harp. Her clear melodic lines against the lower contrapuntal notes are perfect, along with glorious Baroque ornamentation. Equally memorable is her performance of Monteverdi’s Pur ti miro from Poppea, which showcases her confident sense of Baroque tempo and style. Seager-Scott also experiments with improvisation in two tracks with Monteverdi bass lines, as one take in the opening track, and layered takes in Harp Party Improvisation.

Her numerous tracks on clarsach harp of the traditional Irish folk music of Turlough Carolan (also known as O’Carolan) are a welcoming musical contrast to the Baroque music. Planxty Burke/Planxty Drew features an uplifting melody against a toe tapping lilt. Equally memorable is the slower emotional and touching performance of Clergy’s Lamentation.

Production is clear and successfully captures the performer’s musical nuances. The detailed liner notes are informative though the tiny print may be difficult to decipher. Keep listening to the end as a secret track with harp and singing complete Seager-Scott’s multifaceted adventure. 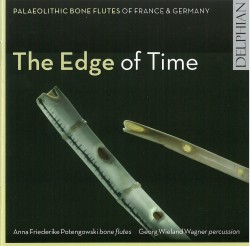 Toward the end of the last Ice Age modern humans began to settle Europe. From fragmentary cave finds and a few complete instruments, it appears that as early as 40,000 years ago these people made and played flutes of various kinds, primarily fashioned from hollow bird bones. These prehistoric flutes could well be the oldest known musical instruments fashioned by human hands. As such they represent the oldest evidence of music production, so closely associated with our species, on our blue planet.

Reconstructing these ancient flutes, and re-imagining their music, is problematic at its core, yet this contested terrain is precisely where the 16 tracks on The Edge of Time – Paleolithic Bone Flutes of France and Germany takes a stand. Classically trained German flutist Anna Friederike Potengowski began to study the four reconstructed bone flutes used on this album and their possible playing techniques in 2010 and formed VentOs with percussionist and composer Georg Wieland Wagner.

Their program of compositions and improvisations reflects an aesthetic deeply rooted in European classical music, the heritage of the two performer/composers. It’s seen in the choices of music vocabulary, extended instrumental techniques, breathing, phrasing and general performance practice. No surprise then that the flutes as played by Potengowski generally closely adhere to tones in the modern standard 12-tones-per-octave scheme, pitched at A=440 Hz.

Make no mistake however; Potengowski gives virtuoso performances on her instruments. Echoing melodies (the original flutes were all found stashed in caves), bird-like calls and breathy nature sounds are sometimes performed solo, but in most cases are accompanied by Wagner splashing water against stones, rustling grasses, chanting and playing marimba arpeggios and bombastic tympani rhythms. The longest, and for me the most successful, complete work is a performance of John Cage’s Ryoanji (1983-85) score, a haunting study of breathy glissandi by all four bone flutes and two insistent, though asymmetrically beating, stone flints. Yet I still wonder how the music played on these flutes might have sounded in the hands of their Ice Age creators. 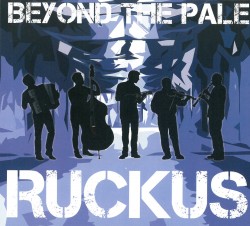 The acoustic Eurofolk ensemble, Beyond the Pale, has been an important voice on the world music scene in Toronto for nearly 20 years. Known for their ability to blend genres in interesting ways, the group continues on that path with their fourth release, Ruckus, their first in eight years.

Instrumental mastery is a hallmark of the album but it comes through in the musicians’ – Bret Higgins (bass), Aleksandar Gajic (violin), Milos Popovic (accordion), Eric Stein (mandolin), Martin van de Ven (clarinets) and Bogdan Djukic and Max Sennit (percussion) – heartfelt and cohesive playing rather than a lot of show-offy, lightning speed runs. That said, there are some displays of virtuosity here and there that really dazzle.

The disc contains a mix of traditional and original compositions, with most of the band members contributing originals in true ensemble fashion. The songs alternate between plaintive ballads and rousing dance and celebration songs. Being a sucker for a low clarinet, the opening track, Atlas Revolt, grabbed me right off the bat. Ruckus in Ralja with its evocation of dance halls of Eastern Europe and the moody restraint of Andale are other standouts.

The instrumentation is essentially the same throughout and although using a variety of techniques and approaches brings some distinctiveness, I have to say that about halfway through the album the songs started to sound somewhat the same. But fans of this style of music will no doubt find plenty to enjoy and will revel in the soundscape of the “Old World,” in the hands of inventive “New World” musicians. 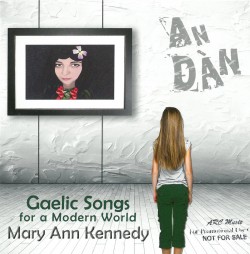 On this inspired recording, Glasgow gal Mary Ann Kennedy wears a number of exquisite hats, including vocalist, pianist, composer, arranger, lyricist and co-executive producer. The CD title, An Dàn, translates as A Song or perhaps the more apropos A Destiny. The project is comprised of 11 brilliantly arranged songs – some ancient, some contemporary – and all rendered in flawless Scots-Gaelic, with an array of traditional instruments and thrilling vocals in tow. It’s not necessary to be a Gaelic speaker to appreciate this collection, as the sheer musicality and emotional depth of the project transcend any cultural or linguistic barriers. An Dàn is a marvelous affirmation of the survival of Gaelic languages – even in the face of the most oppressive 19th-century imperialism and near cultural genocide.

The opening track, Seinn, Horo, Seinn (Sing!) is rife with gorgeous string lines as well as Kennedy’s lovely, diaphanous, pitch-pure, soaring soprano. Next up is Óran do dh’lain Dómhnallach (Song for John MacDonald) which features a poem by the 20th-century Gaelic literary giant, Irig MacDonald. Gaels have a real poetic tradition of both eulogy and elegy, and nowhere on the CD is this more evident than on this composition. A tribal, male chorus adds to the track, reflecting MacDonald’s postwar life in Ghana and South Africa. Kennedy wrote the song in that tradition, and she also utilizes a sample of a vocal sequence from the Tswana and Sotho Voices.

Dàn Ur do Fhlóraidh NicNill (A New Song for Flora MacNeil) is arranged with sophistication and dissonance, and invokes ancient, Iron Age musical motifs. Finlay Wells’ light and clear guitar work is enhanced by Jarlath Henderson’s pipes – and with the addition of the strings, a sort of Celtic wall of sound is created. Two other standouts include Grádh Geal Mo Chridhe (My True Love) – a complex and masterfully produced track featuring superb choral segments and Air Leathad Slèibhe (On a Hill-land Slope) with lyrics by another 20th-century Gaelic literary giant, George Campbell Hay. This heady tune conjures up a vision of ancient Celtic settlements enveloped in mist and magic, as well as deeply-rooted spiritual connections to Mother Earth and reverence for her cycles. 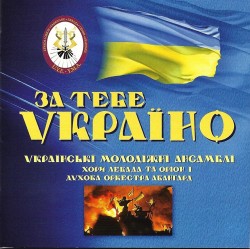 The Ukrainian Youth Ensembles are a Toronto-based group consisting of the Levada Women’s Choir, the Orion Men’s Choir and the Vanguard Concert/Marching Band. Music director Roman Yasinsky is ably assisted by choral conductor Zhanna Zinchenko. The majority of the 100 plus members trace their ancestry back to Ukraine.

This CD is a compilation of 25 selections all of Ukrainian origin, opening with the rousing Our Unseverable Kozak Ancestry with combined choirs and band accompaniment. And then there is a broad spectrum of combinations. The choirs are heard individually or combined with band accompaniment, piano accompaniment or a cappella. Seven of the selections are from the Songs of the Ukrainian Sich Riflemen, who were instrumental in recapturing Kiev from the Red Army in 1918.

Instrumentation of the band is somewhat different from what we normally find in a full concert band. There are no oboes, bassoons or bass clarinets, but the brass sections are augmented by instruments usually confined to brass bands. There are E-flat alto horns in addition to the French horns, and there are twice as many cornets as trumpets. Overall, the performances are excellent, as is the recording quality.

At first sight the cover of this CD might be intimidating for anyone who is not fluent with the language. However, it comes with a 24-page booklet, in both Ukrainian and English, containing photographs of the ensembles in addition to notes on the music. 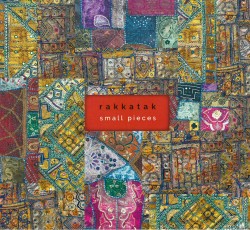 Toronto tabla player Anita Katakkar founded Rakkatak as a solo project in 2009. Abetted by a laptop and sequencer, hers was a mix of classical Hindustani music and electronica performed with a pop-music aesthetic. For Small Pieces, Katakkar invited into the studio bassist Oriana Barbato, sitar player Rex Van der Spuy who’s been playing sitar in Toronto since 1989, plus eight guest musicians. Collectively they represent a cross-section of what has been tagged the Toronto Gharana – local musicians pursuing music rooted in the classical Hindustani tradition. The larger ensemble on the album also effectively broadens Rakkatak’s aesthetic focus to embrace a more inclusive sonic palette.

Of mixed Indian and Scottish ancestry, Katakkar noted that “I heard plenty of Indian music growing up from my grandmother.” She began studying tabla with the Toronto Tabla Ensemble’s Ritesh Das, and later in California and Kolkata with the pre-eminent tablist Pandit Swapan Chaudhuri. As she matured as a creative musician Katakkar found she “had stories to tell.” Eesha’s Song, track five on Small Pieces, featuring the sitar of Joanna Mack and violin of Jessica Deutsche, was meant as an elegy to a friend’s daughter who passed away much too young. In it, Katakkar’s tabla solos “were inspired by running up a big hill and barely being able to keep up, sort of like Eesha’s heart.”

The album closes with Riffing on 9, a solo for Katakkar, bringing the album back to her early career working with just tabla and laptop. It’s a stripped down salute to the Asian Underground movement that initially inspired her on her fascinating creative journey.