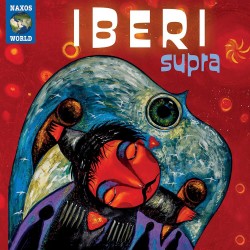 Buba Murgulia, leader of the Georgian male-voice choir Iberi, is described in the Supra liner notes as “growing up surrounded by singing,” like many Georgians. Unlike most however, he formed a choir with other passionate countrymen. They’ve taken Georgian song to international audiences since 2012, touring Europe, USA, Asia and Australia.

Recognizing the significance of Georgian vocal polyphony, in 2008 it was inscribed on UNESCO’s List of the Intangible Cultural Heritage of Humanity. Iberi’s broad repertoire includes a variety of regional Georgian styles, drawing on the rich history of Georgian polyphonic song.

The word supra is commonly translated as “feast.” Integral to Georgian society, this ancient, frequently multi-day tradition, features wine, food, singing and ritualized toasting which reaffirms the essential values of life, the importance of the ancestors and the motherland.

Iberi’s new album Supra is a selection of 13 songs that you might well hear at such a celebration. I was stirred by feast songs like Mravalzhamieri (May You Live Long), soothed by the medieval Georgian hymn Shen Khar Venakhi (Thou Art a Vineyard) and charmed by the urban love song Mkholod Shen Erts.

My only regret? I didn’t have a bottle of Georgian wine at hand to join in the supra.