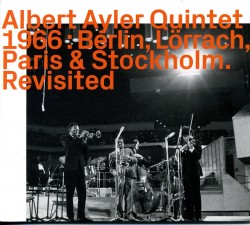 A historical keepsake from the first extensive European tour by the quintet of innovative tenor saxophonist Albert Ayler (1936-1970), this two-CD 16-track set features re-mastered radio broadcasts from each of the cities visited. It’s notable, since except for trumpeter Donald Ayler, the band was completely new and included bassist William Folwell, drummer Beaver Harris and violinist Michel Samson. Someone who came from and returned to contemporary notated music, Samson’s emphatic, astringent string slices and staccato glissandi immeasurably change the interpretation of Ayler originals.

Concert considerations mean that Truth is Marching In, Our Prayer, Bells and Ghosts, for instance, are played three times, often as part of a medley, yet each has a unique emphasis. In Berlin, Truth… is treated as a bouncy march with trumpet yodels, string jumps and drum ruffs; in Lörrach, it starts as a refined dirge before guttural saxophone split tones and presto brass sprays jerk the theme to a bouncy climax. In Stockholm, the interpretation judders between a detached harmonized exposition and a climax that kinetically projects altissimo reed screeches and drum pops. Samson’s double and triple stopping frequently contrast with Ayler’s pitch straining, honking scoops and multiple theme interpolation — Paris hears snatches of La Marseillaise, for instance. Yet those triple-tune renditions, versions of other compositions played twice and new versions of some little-recorded Ayler lines, mean the end result is unique. A half century on, Ayler’s mix of spiritual seriousness and carnival-like jollity remains inimitable. Yet this set offers a different and rare take on his creations.