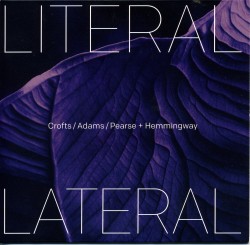 Adding just enough emphasis to boost this free-flowing program to an elevated plane is American drummer Gerry Hemingway. That’s because the monumental sound infrastructure already launched by the Halifax-based trio of pianist Tim Crofts, cellist Norman Adams and bassist Lukas Pearce needs only supplementary foundation work not rococo decorations. One of the most in-demand percussionists internationally, conversant in jazz, notated and free music, Hemingway arrives with the appropriate tools, knowing exactly when either earth-moving crunches or subdued tapping is appropriate. Pillars of suddenlyLISTEN, the Nova Scotia capital’s creative music hub, Crofts, Adams and Pearce have played with many non-Maritimers developing a distinctive sound.

On Literal Lateral’s nine tracks the string players are so assured that on a track such as Pre-Reveal the expected chordal textures are boosted by others which sound as if they’re being powerfully strummed from a 12-string guitar or finessed by Delta bottleneck picking. Meantime Hemingway angles cymbal clanks and Pearce thumps a low-pitched ostinato beside them. The bassist’s pizzicato double stops, col legno pops or spiccato pulses consistently add nec-essary ballast to many tracks, especially on Shard Work that begins with such a deep-seated string buzz that it could be a blast from a tuba. Urged to a buoyant clip by bell-hammering, that performance also includes a full-out swing sec-tion initiated by the pianist and underlined by poised cello sweeps.

Nevertheless passages that resemble angular modern jazz are no more prominent than what could be seen as through-composed New Music motifs. Many compositional and improvisational sequences are pressed into use throughout to ensure the music flows appropriately and chromatically. In fact Beacon vs Lure, the CD’s longest and most defining track, wraps those influences into an interface that also finds space for atonal, electro-acoustic buzzes and whistles, rumbling piano glissandi plus a smoothly romantic cello line. Building to a crescendo of crossing and echoing tones, Crofts’ steeplechasing across the keys leads to a narrowed satisfying conclusion.

Literal Lateral could be the most winning American-Maritime connection since the United Empire Loyalists moved north more than two centuries ago.