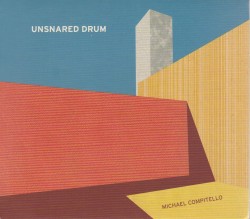 All my musical doubts and questionings about the snare drum’s credibility as a solo instrument immediately vanished with a crash as I listened to American percussionist/teacher Michael Compitello perform the compositions he commissioned for his solo snare drum project.

Compitello provided each invited composer a snare drum, sticks, mallets and “other implements” to explore the instrument’s extended musical capabilities while working in close collaboration with him. Nina C. Young’s Heart.throb (2019) opens with an attention-grabbing roll and crescendo. Young’s added transducers feature electronic tonal/dynamic held notes against constant snare and brush hits which emulate heart throbs until a final “classic” loud snare drum build to a closing solo electronic held note. Hannah Lash’s Start (2018) is scored for snare only and various stick types. Fascinating diverse sounds from loud to soft and short/crisp to quieter vibrating, tell a mood-changing, pulsating story. Amy Beth Kirsten’s Ghost in the Machine (2019) is hypnotic, with more pulses, clicks, washes and brief high-pitched rings and conversational effects aided by such added snare sound-creating “implements” as triangle and shot glasses. Tonia Ko’s Negative Magic (2019) opens with snares turned off, as resounding deep sounds alternate with rim shots. Musical sections include drops to almost inaudibility and to more mysterious sounds. Midpiece, the snare is abruptly turned on for welcome short hits, rolls and clicks. Snares off again as rolls and scratches lead to silence.