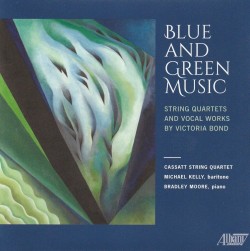 From an Antique - Ozymandius

Blue and Green Music features two string quartets by American composer Victoria Bond performed by the Cassatt String Quartet along with the song cycle From an Antique Land and the standalone song Art and Science, both featuring baritone Michael Kelly with Bradley Moore, piano (Albany Music TROY1905 albanyrecords.com). The title work takes its inspiration from a painting of the same name by Georgia O’Keeffe, in the words of the composer an “abstract study in motion, color and form, with the interplay of those two colors that dance with each other in graceful, sensuous patterns.” The four movements endeavour to represent that interplay, and to these ears succeed gracefully and gleefully in the final movement Dancing Colors. Art and Science takes its text from a letter which Albert Einstein wrote to the editor of a German magazine that the composer says “even though it was written as a letter, the organization of thoughts was startling. There was such logic […] and such a sense of form that it was as though Einstein had composed a poem….” More traditionally, From an Antique Land does use poetry, with Recuerdo and On Hearing a Symphony of Beethoven by Edna St. Vincent Millay bookending poems by Percy Bysshe Shelley and Gerard Manley Hopkins. The accompaniment in the final song cleverly incorporates echoes of the third movement of Beethoven’s Ninth Symphony. Although texts are not provided in the booklet, there are synopses, and frankly, Kelly’s lyric baritone voicing is so well articulated that the words are clearly understandable.

Dreams of Flying was commissioned by the Audubon Quartet and Bond took the name of the ensemble as inspiration to create a piece about birds. The opening movements, Resisting Gravity and Floating are as their titles describe and set the stage for the playful and boisterous The Caged Bird Dreams of the Jungle, which, after a gentle opening becomes truly joyous, replete with chirps, whistles and cries as the birds of the jungle awake. The work and the CD end exuberantly with Flight, featuring rising motifs, high glissandi and repeating rhythmic patterns. Here, as throughout this entertaining disc, all the performers shine.