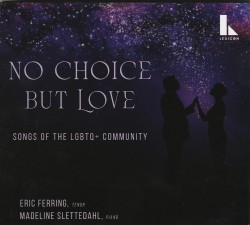 No Choice but Love - Listen on Spotify

In this rather breathtaking, two-disc recording, noted American tenor Eric Ferring – in a made-in-the-stars collaboration with pianist Madeline Slettedahl – has created a significant piece of work that highlights many diverse LGBTQIA voices and perspectives. Included in the project is the world premiere of composer Ben Moore’s Love Remained (in a new arrangement for tenor voice) and his commissioned title work, No Choice But Love. Ferring has expressed “As members of this community, Madeline and I wanted to pay homage to the beautiful, difficult history of the LGBT+ community within the classical world… we, as artists must use our gifts to be catalysts for change…” The talented producers of this artful collection are Gillian Riesen and Rebecca Folsom.

A true standout is Gordon’s Prayer. Ferring and Slettedahl move as one being through this luminous, deeply spiritual composition and Britten’s Canticle I is an inspired inclusion. The magnificently rendered title track was debuted on this year’s National Coming Out Day and nothing could be more appropriate. This performance and the entire recording is a clear hope for understanding, love and acceptance. Bravo!