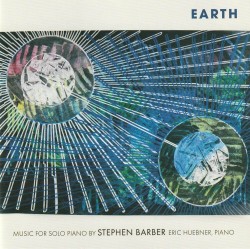 Stephen Barber is a composer who splits his time between New York City and Austin, Texas. He composes music for TV and film and has extensive roots in pop music, but he is also a serious composer of art music and this disc is a collection of 13 of his short character pieces for solo piano. Barber studied composition with John Corigliano and it shows: his music is complex, his language is contemporary but the results are highly descriptive. Each work on this disc has an evocative title, some of them self-explanatory like Fireflies and Twilight in Tahiti, others more abstract like Stop, a tribute to Wayne Shorter, and Opium-White Fur, based on the writing of author Jardine Libaire. There are moments of real beauty in Easter, a tribute to J.S. Bach, and Earth, a meditation on the state of our planet.

One of the most striking pieces is about the Trump presidency: a dark and quirky combination of crude, lurching chords, repetitive outbursts and some fascinating effects with the sustain pedal. Barber is certainly not the first composer to try to appeal to both pop and “serious” listeners but he succeeds particularly well without sacrificing too much complexity or depth. All the works are performed by contemporary music specialist Eric Huebner, the New York Philharmonic’s pianist and a teacher at SUNY Buffalo and Juilliard. Huebner’s playing is masterful and entirely convincing: flawless technique, clear voicings and impeccable timing.