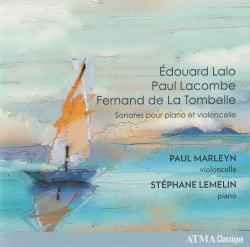 Sonata for Piano and Cello in A minor: I. Andante non troppo — Allegro moderato

Sonata for Piano and Cello in D minor: II. Lentement

Édouard Lalo | Paul Lacombe | Fernand de La Tombelle – Sonates pour piano et violoncelle (ATMA Classique ACD2 2873 atmaclassique.com/en) features two highly regarded Quebecois performers, cellist Paul Marleyn and pianist Stéphane Lemelin. Of course I was familiar with the Cello Concerto in D Minor of Lalo (1825-1892) which has graced the standard repertoire since 1877, but his Sonata for Piano and Cello in A Minor from two decades earlier has languished in relative obscurity. Listening to the dynamic work, it is hard to understand why. It is a substantial offering with contrasting movements, lyrical and dramatic by turns, with memorable melodies and virtuosic flare. The same is true of the other works included here and it is surprising they, and their composers, are not better known. Although Lacombe was born only a dozen years after Lalo his Sonata for Piano and Cello Op.100 was written about 50 years after Lalo’s, in the early years of the 20th century. For all that, it shares a sensibility and language with Lalo, not reflecting the turbulent aesthetic changes happening around him, although there is Debussy-like melody in the opening movement un peu animé. This is followed by a lyrical Largo and concludes with an ebullient Allegro con fuoco. Baron de La Tombelle (1854-1928), numbered among his mentors Franz Liszt and Camille Saint-Saëns and he himself went on to count revered organist Marcel Dupré and composer/pedagogue Nadia Boulanger among his own pupils. Not only an accomplished musician and teacher, La Tombelle was also a distinguished poet, painter, sculptor and astronomer. His Cello Sonata in D Minor Sonata (1905) opens with an exuberant Allegro, followed by a gentle lullaby-like Lentement movement before its rousing Allegro vivace finale. Here, as throughout the disc, Marleyn and Lemelin’s playing is nuanced, articulate and totally convincing as it meets all the demands of this lovely music.