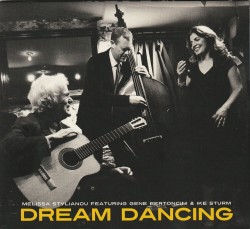 My One and Only Love

This writer purchased Melissa Stylianou’s 2006 release Sliding Down after hearing her perform in Toronto, which was my introduction to the vocalist’s tasteful singing and composing. It was also my introduction to guitarist Kim Ratcliffe whom I knew of but hadn’t heard, and a chance to hear Kevin Breit who I had just gotten to know. When offered the chance to review Dream Dancing, I delighted in the opportunity to revisit Stylianou’s music over 15 years later, accompanied by yet another great guitarist, Gene Bertoncini.

Renowned New York bassist Ike Strum is the third bandmate on this recording, and does an exquisite job filling in spaces left by voice and guitar. In this chamber jazz setting devoid of drums, there is simultaneously a rhythmic responsibility to be aware of, as well as the freedom of knowing that each note and chord can be heard clearly.

Bertoncini throws an occasional harmonic curveball Stylianou’s way, as any exciting and interactive guitarist will tend to do, but each of these interesting challenges are responded to in a sensitive yet sophisticated manner. The album’s penultimate and final numbers My One and Only Love and It Might As Well Be Spring both attest to this, with the NYC-based Canadian vocalist adjusting range and phrasing to fit best with her bandmates. Dream Dancing is a great vocal album yhat transcends the jazz vocal realm enough to be enjoyed by instrumentalists and listeners of all genres.