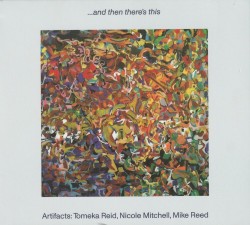 The musical density and raw vibrancy, of the work by Artifacts – cellist Tomeka Reid, flutist Nicole Mitchell and drummer Mike Reed – often sounds as if it has sprung into being from a point before time as we know it, as well as from a future way beyond time. It evokes elemental human or natural forces from the rhythm of the natural world, sculpted in short and long inventions, by the joyously pendulous swing of time.

…and then there’s this owes much to being formed in the Association for Advancement of Creative Musicians. Black to the Future Afrofuturism is in the spine of the trio’s wondrously dark, vivacious musical palette. Homage is duly paid to Muhal Richard Abrams and Roscoe Mitchell on Soprano Song and No Side Effects. The rest of the music comprises originals by the trio – Reid, Mitchell and Reed – and is made in the melodic, harmonic and rhythmic image of gleanings from (to coin a phrase) the Tao of AACM, But each song embodies the unique personality of the composer and the collective

Reid’s voice is loose, joyously effusive, and redolent of soaring pizzicato leaps and capricious arco shrieks. Mitchell’s is magical, more tightly informed but with a similar depth of feeling and abounding in contrapuntal vigour and strange harmonies. Reed is a percussion colourist par excellence, tempering the rattle of drum skins with provocative hissing of cymbals. In Response, Blessed and Pleasure Palace are the album’s high points.