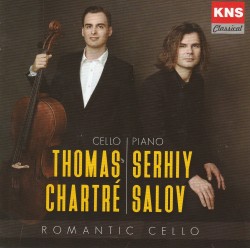 The following review is an excerpt from Editor's Corner (May 2021) which can be read in its entirety here.

Beethoven’s late works form a bridge from the Classical era to the Romantic, and the next disc has some striking works for cello from this latter period. Romantic Cello on KNS Classical features works by Schumann, Brahms and Brahms’ only composition student, Gustav Uwe Jenner, performed by young Toronto-based cellist Thomas Chartré (thomaschartre.com) and Ukrainian-born pianist Serhiy Salov (serhiysalov.com). Among Chartré’s accolades is a first prize in the Canadian Music Competition, the Sylva Gelber Award, and the loan of the “Gand Père” cello from the Canada Council Instrument Bank in 2016. He currently plays a Giovanni Battista Ceruti cello (1815) on loan from Canimex which is perfectly suited to the repertoire on display here. Salov also has many achievements and awards, but surely a highlight of his young career was touring South America with the Montreal Symphony Orchestra and Kent Nagano, as soloist in Liszt’s Second Piano Concerto. I must confess that Jenner’s name was new to me, but what a wonderful expansion of my knowledge of the period. It was thanks to a recommendation from Brahms that Jenner was appointed music director at the University of Maltburg in 1895, a position he held until his death 25 years later. The Sonata in D Major was first performed by Jenner and cellist Hugo Becker in 1904, and although quite Brahmsian in its sensibility, it is infused, in Chartré’s words, “with Jenner’s distinctive artistic voice.” The three-movement work in the traditional fast-slow-fast form is lyrical and at times dramatic, if a bit anachronistic – nothing forward-looking here. Of particular note is the Andante con variazioni played with tasteful expression and restrained use of vibrato. Jenner’s piece is followed by Schumann’s Adagio and Allegro Op.70 composed in 1849. Although originally for French horn, a relatively new invention at the time, and taking advantage of the chromatic possibilities of that valved instrument, the composer also intended it for performance on violin, viola or cello. It works especially well in the warm, rich range of the cello in the hands of Chartré. Brahms’ Cello Sonata No.1 in E Minor, Op.38, completed in 1865, brings the disc to a suitably Romantic close. This is a promising maiden voyage from a young duo that I hope to hear more of.