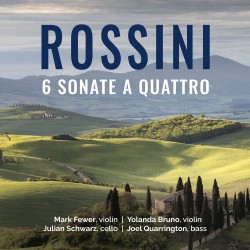 Sonata a quattro No. 1 in G Major: I. Moderato

Sonata a quattro No. 3 in C Major: I. Allegro

Sonata a quattro No. 6 in D Major: III. Tempesta. Allegro

The following review is an excerpt from Editor's Corner (May 2021) which can be read in its entirety here.

Rossini – 6 Sonate a Quattro (leaf-music.ca) features two musicians who need no introduction, violinist Mark Fewer and bassist Joel Quarrington, and two rising stars, violinist Yolanda Bruno and cellist Julian Schwarz. They were recorded in conjunction with residencies at the Lunenburg Academy of Music Performance in Nova Scotia in 2017. I had the pleasure of working with Bruno in May 2018 when her Iris Ensemble participated in New Music Concerts’ “Zipangu!” as part of the 21C Festival. On that occasion she played both violin and viola. Coincidentally, she was the recipient of the loan of the Stradivari Taft violin (1700) from the Canada Council Instrument Bank the same year that Chartré had the “Gand Père” cello. Schwarz, scion of the famed American musical family, made his US touring debut in 2010 with the Moscow Radio Symphony Orchestra and was the recipient of the first prize at the inaugural Schoenfeld International String Competition three years later. Rossini’s sonate a quattro are youthful works, disavowed by the composer as “dreadful sonatas composed […] at a most infantile age, not even having taken a lesson in accompaniment.” That being said, they are charming works that must be a lot of fun to play – it certainly sounds like these musicians are having a good time at any rate. Written at the estate of Rossini’s friend Agostino Triossi at the age of 12, the unusual instrumentation – two violins, cello and contrabass – reflect the resources available there: Triossi played the bass, his cousins violin and cello, and Rossini took second desk. Rossini’s scorn notwithstanding, these pieces have been in the repertoire ever since he wrote them. They were first published as traditional string quartets and later in an arrangement for wind quartet; it was not until 1954 that the original manuscript came to light. These performances use the 2014 Critical Edition published by the Fondazione Rossini Pesaro and as such I am willing to declare them definitive. Although there are few indications of the operatic writing to come from one of the giants of that form, these are delightful works played with a twinkle in the musicians’ eyes and a sparkle in their step. One more personal note: after reading Vikram Seth’s An Equal Music which mentioned a “lost” string quintet arrangement of one of Beethoven’s piano trios, I had the temerity to ask Fewer whether he would be willing to read through the piece with me and a group of my friends. He agreed and it remains one of the highlights of my amateur music making to have spent an afternoon working on this rarely performed piece with such a consummate musician. As I recall, he did not think very highly of the string writing adapted from the piano part, but was gracious about it all and the afternoon provided me a treasured memory.