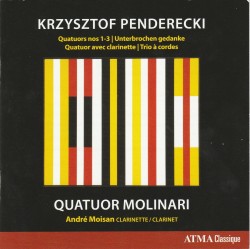 A new ATMA release – Krzysztof Penderecki featuring Quatuor Molinari (ACD2 2736 atmaclassique.com/en) – also feels like an old friend. Although I did meet Penderecki on several occasions, I did not have the opportunity to get to know him. But I have met founding violinist Olga Ranzenhofer and through her the quartet’s namesake, the late painter Guido Molinari, both of whom I would consider friends. This latest disc in the Molinari’s extensive catalogue includes Penderecki’s two early avant-garde string quartets from 1960 and 1968 with their graphic scores and extended techniques, and the much later, more conservative String Quartet No.3 “Leaves from an Unwritten Diary” from 2008, a kind of autobiographical reminiscence replete with references to earlier works. Being familiar with these from a number of recordings, particularly those of Kitchener-Waterloo’s Penderecki String Quartet, of more interest to me are the in-between works included here, that give a kind of context to the transition from angry young man of the 60s to the successful gentleman of his later years. They include the brief movement for string quartet, The Broken Thought (1988), the String Trio (1990) and a Quartet for Clarinet and String Trio (1993). The trio opens aggressively but gradually subsides into variations on Penderecki’s signature descending-note motif. The clarinet piece begins gently, and even in its more strident moments is playful and melodic. Clarinetist André Moisan proves to be the perfect foil for the members of the Molinari, whose playing, as always, is exemplary in its expressivity. A fitting tribute to Penderecki, who died in late March, 2020 after a long illness (not related to the coronavirus). He was 86.