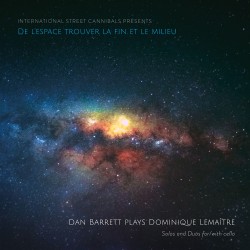 As Terry Robbins says a little further on in these pages, “It’s been a simply terrific month for cello discs.” There are three that I scooped up for myself, beginning with De l’espace trouver la fin et le milieu: Dan Barrett plays Dominique Lemaître – solos and duos for/with cello (New Focus Recordings fcr276 newfocusrecordings.com/catalogue). French composer Dominique Lemaître, born the same year as John Luther Adams (1953), studied humanities and musicology at the University of Rouen and later electroacoustics and composition at the Paris Conservatoire. Infused with the music of Bach, Debussy, Varèse, Ligeti and Scelsi, but also with extra-European influences, Lemaître ‘s works blend superimposed metres, polytextures, looped repetitions and an underlying modality. American cellist Dan Barrett, creator and director of the music ensemble International Street Cannibals (ISC), has been hailed as “a brilliant and driven cellist, composer, and conductor” (Huffington Post), whose instrumental playing is described as “fire and ice” (The New York Times).

The disc begins with the cello duo Orange and Yellow II, performed with Stanislav Orlovsky. It pays homage to Morton Feldman and is a transcription of a piece originally written for two violas in 2009. The title makes reference to the eponymous painting created by Mark Rothko, to whom Feldman himself paid homage in Rothko Chapel, composed for the meditation room of the building of the same name. Although purely acoustic in nature, the layering and looping of the two instruments, and the reverberant space in which it was recorded, give the impression of electronic enhancement. Thot, referring to the Egyptian god Thoth, is an earlier work dating from 1994. It is a duet with clarinetist Michiyo Suzuki that begins from silence with a gradually building clarinet tone reminiscent of the Abîme des oiseaux movement in Messiaen’s famous Quatuor pour le fin du temps. The contemplative mood continues throughout the six-minute work, intermittently interrupted by bird-like chirps. The next piece, Mnaïdra for solo cello, opens abruptly and almost abrasively, although it, too, gradually subsides into warmer tones. Mnajdra is a Bronze Age temple situated to the south of the island of Malta, the isle of bees or the isle of honey, as it was called in ancient times.

Pianist Jed Distler joins the cellist in Stances, hommage à Henri Dutilleux, the famous French composer from whom Lemaître received both encouragement and compliments. It was written in 2015 and is dedicated to Barrett. The disc ends with another solo cello composition, Plus haut (Higher), which, although still in a quiet way, is the most virtuosic piece of the collection. Barrett shows himself astute across the spectrum from the softest nuance to the soaring heights.